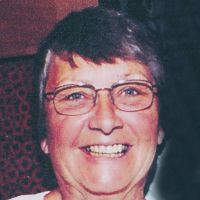 Virginia “Ginger” L. Nelson, of Sheridan, passed away on Thursday, November 10, 2016, at the Sheridan Memorial Hospital after a lengthy battle with cancer. She was 66 years, 20 days old. She was born to parents Leon and Reva (Kraus) Nichols on October 21, 1950, in Cedar Rapids, NE. They moved to Cozad where Ginger later graduated from High School in 1968. She often played piano for the church where her family attended. Shortly after High School, Ginger attended airline school. She later worked for the FBI as a teletype while living in Washington DC. She married Ron Fairchild. They lived in Idaho. They had two boys, Chad and Scott. They later divorced.In 1980, she married Kevin Nelson in Cozad. In Cozad, Ginger worked as a florist for many years and also as a cook at the High School cafeteria. In 1993, Ginger and Kevin moved to Sheridan, WY, purchasing Sheridan Brake and Alignment. Together they turned it into a very successful auto shop. Ginger enjoyed keeping the books for the business.Ginger lived life to the fullest. She loved being outdoors and tending to her many flower gardens. She loved to go camping and fishing. Later in lifer her passion was downhill skiing. In spite of experiencing several ski related injuries—a severe head injury and both knees, which required surgery—she never gave up and became a good skier. She enjoyed several other sports; bowling, golf, and trap shooting, along with many of the good people involved in them. On a warm summer day, you could find Ginger out riding her Harley Davidson. She loved the wind blowing in her face. Ginger loved to travel. She visited Italy, Greece, Ireland, Turkey and Germany.Her father, Leon, preceded Ginger in death. She is survived by her husband, Kevin, children, Chad (Jennifer) Fairchild of Spokane, WA, Scott (Lisa Buller) Fairchild of Sheridan, WY, mother, Reva Nichols of Cozad, NE, brothers, Doug (Sally) Nichols of Kearney, NE, Dallas (Jan) Nichols of Cozad, NE, six grandchildren, Geordon, Jaiden, Jasmyn, Jillian, Izaiha and Elijah and many nieces and nephews.A private family Graveside Service will be held. The family requests, no flowers please. Donations can be made in her honor to Real Life Christian Church, 874 Beaver Street, Sheridan, WY 82801.Kane Funeral Home has been entrusted with arrangements.