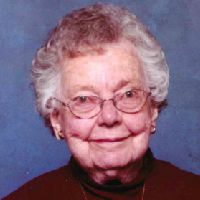 Glada was born in Yuma, Colorado, and grew up in Cainsville, Missouri on a farm. She moved to Gillette, Wyoming as a teen. After graduating from high school, she took \"Normal Training\" and taught all grades in a one room school house. In 1936 she married Orville Cornelius and settled in Sheridan, Wyoming, where she raised their two daughters.She worked at her husband\'s print shop and later as head cook in the Sheridan High School cafeteria, until retirement at age sixty-seven. Widowed at age sixty-nine, she continued to manage three apartments in her Sheridan home. A spunky lady, she even learned to drive at age seventy! In 2001 she moved to Alamosa, Colorado to live with her daughter Marilyn, and after two years emigrated to Canada, where her older daughter Beverly lived.Glada traveled widely in her later years, welcoming grandchildren in New Mexico, Alabama and Alberta. Other trips included Taiwan and New Zealand. She was active at First Baptist Church in Sheridan for sixty years, teaching Sunday School and supporting women\'s ministries.Glada loved sewing, quilting, reading, gardening and playing word games. After her husband\'s retirement they played a game of Scrabble nearly every evening. She continued to love and play table games even into her last month of life.Mrs. Cornelius was preceded in death by her parents, Alta and Everett Hamilton, her husband Orville Cornelius, an infant daughter Loreta, an infant grandson Carl Frederick Rink, two brothers, William Dale Hamilton and Doyle Everett Hamilton, and one sister Julia Gladys Sobotka. She is survived by her two daughters, Beverly Rose Rink of Stony Plain, Alberta, Canada and Marilyn Beth Stafford of Alamosa, Colorado, and her sister-in-law Harriet Hamilton of Coeur d\'Alene, Idaho, six grandchildren, thirteen great grandchildren, and numerous nieces and nephews.Services will be held at 3:00 on Saturday, May 2, 2015, at Kane Funeral Home with Reverend Arthur Maendl officiating. Interment will be in the Sheridan Masonic Circle with a reception to follow at the Kane Reception Hall.Memorials to honor Glada may be made to the Samaritan\'s Purse, PO Box 3000, Boone, NC 28607.Kane Funeral Home has been entrusted with arrangements.