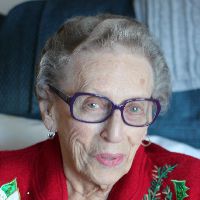 Gladys Trott-Kamping, a lively woman from her earliest days in Illinois to her final years in Sheridan, passed away June 17, 2018, at age 87, at the Greenhouse for Living, with family at her side.Gladys was born June 11, 1931, in Pekin, Ill., to Andrew Abondio Calvetti and Gladys Edna Calvetti, née Belcher. She was the first of the couple’s six children, born through the Great Depression, World War II and the early 1950s. Often left to care for her younger siblings while their parents worked, Gladys fondly remembered walking her brothers and sisters to the afternoon matinee when movies cost a dime.Through the Depression, the family moved from Illinois to Idaho and finally to Wyoming and Montana. Always determined and hardworking, Gladys was often ahead in school. After her high school graduation in 1948, she wanted to find office work, so she approached the Rural Electrification Association about a job.She interviewed with the man who would become her father-in-law, and true to her nature, Gladys knew what she wanted: a job. She got it.It was there at age 17 that she met her future husband, Harold Edgar Trott. Harold managed the Rural Electrification Association for his father. Harold and Gladys were married on Aug. 12, 1949, by a Presbyterian minister in Sheridan. Though she lived in Lodgegrass, Mont., at the time, her father loaded Gladys and all of her six siblings into the truck for the wedding. The two had three children, beginning in 1952. Son James Harold was followed by daughters Diana and Donna.In the 1950s, Gladys shifted from office work to the role of primary caregiver until her youngest child was seven or eight, though she also worked nights as a switchboard operator for a telephone company. She always knew she wanted to work. She hoped to set an example for her children, who she wished would attend college one day.She dreamed of teaching English, but following her late husband’s unexpected death in 1972, she focused her energy on getting her children through school. She worked for the Forest Service before taking her career-long position with the Social Security Administration.Gladys scored in the top tier on her federal exams and worked in social security for 25 years, in both Wyoming and in Washington state.There she met and married the second love of her life; her second Harold. Gladys and Harold Eugene Kamping were married on June 12, 1991, one day after Gladys turned 60. The two were happy for 18 years together until his death in 2009.In 2009, Gladys returned to Wyoming to be nearer to her children.From her earliest days helping her mother ration during World War II to her later years laughing alongside loved ones about the good times and the bad, family was the most important thing to Gladys. Survived by children, grandchildren and great grandchildren, her legacy lives on.Gladys was preceded in death by her parents, both husbands, and her sisters Dorothy Pease, Elaine Zettle and Kathryn Calvetti.Gladys is survived by brother, John Calvetti (Sandy) Cheyenne, WY; sister, Juanita Fladland, Billings, MT; Children Jim Trott (Riva), Sheridan, WY; Diana Yata (Alan) Oceanside, CA; Donna Kinskey (Dave) Sheridan, WY; eight grandchildren and 13 great grandchildren.A Memorial Mass will be Tuesday, July 10, 2018, at 10 a.m., at Holy Name Catholic Church, with Fr. Glenn Whewell officiating. A reception will follow at Parish Hall at the church.Kane Funeral Home has been entrusted with arrangements.