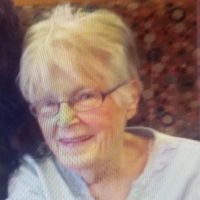 Gloria Jean (Hay) Hogelund, 91, of Buffalo, WY died June 21, 2018 following a brief illness. Gloria was born January 16, 1927 in Kansas City, KS to Elmer and Gertrude Hay and sister Dorothy. Like many of her generation, she graduated from high school early to help with the war effort. In 1947 she married her high school sweetheart, Leonard Hogelund, after his service in the Pacific Theater with the Navy. Gloria and Leonard settled in Overland Park, KS and had two daughters, Linda and Karen. Gloria was a talented seamstress and made many beautiful dresses for the girls. The family enjoyed trips to the family cabin at the Lake of the Ozarks and Leonard and Gloriaenjoyed square dancing. At the age of 43, Gloria was surprised with a son, Kent Alan. (Leonard blamed this on a trip to Las Vegas). She and Leonard retired to the Lake of the Ozarks and Arizona. Following Leonard’s death in 2001, Gloria moved to Buffalo, WY.She was preceded in death by her husband, Leonard and son, Kent. She is survived by her sister Dorothy Masterson of Kansas City, KS; daughters Linda (Scott) Kitzerow of Overland Park, KS; and Karen (Sandy) Ward of Buffalo, WY; four grandchildren and two great-grandchildren. She is also survived by her beloved Cocker Spaniels, Missy andMuggs. No services are planned and cremation has taken place.Kane Funeral Home has been entrusted with arrangements.