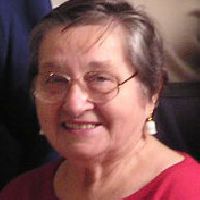 Goldie P. Meyerstein, 88, of Sheridan, passed away Thursday, February 2, 2017, at the Westview Health Care Center. Goldie (Zlata, “Zee”) Piroch was born December 4, 1928, in Liptovsky Mikulas, Czechoslovakia. She, her parents, and her younger sister fled Czechoslovakia at the start of WWII and arrived in the U.S. in 1939. Goldie graduated from the University of Minnesota and then received her Ph.D in linguistics from the University of Michigan. She married Rudy Meyerstein in 1955 and they had two sons.Goldie worked as a professor at UCLA and later as a long time teacher in the LA public school system. She retired to Sheridan in 1985 where she owned and managed a multiple-apartment home (Chrysalis Manor) and was active in both the Homemaker’s Club and her beloved First United Methodist Church.Goldie was preceded in death by her parents, Jan and Antonia Piroch, her husband, Rudy S. Meyerstein and her sister Jennie D. (Piroch) Selvig. She is survived by her children Philip Meyerstein of Sheridan and Michael (Jana) Meyerstein of Visalia, CA; grandchildren Jenna, Lisa and Daniel; niece Robin Selvig; nephew Jan (Lizbeth) Selvig; and long-time friend Betty DeRitaServices will be held at 10:30 a.m. on Monday, February 6, 2017, at the First United Methodist Church with Pastor Don Derryberry officiating. A reception will follow at the church.Memorials to honor Zee may be made to First United Methodist Church at 215 W. Works, Sheridan, WY 82801.Kane Funeral Home has been entrusted with arrangements.