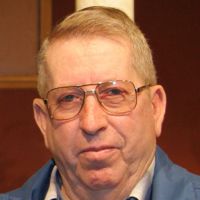 Harold Eugene Harnish, 75, of Sheridan, WY, passed away September 30th, 2013, surrounded by his loving family, of complications from his fight with diabetes and cancer. Harold was born August 1, 1938 in Buffalo, WY to Harold E. Harnish (Red) and Ruth Wilma Mitchell-Harnish. As a child, Harold grew up in Clearmont and then moved to Sheridan. On Halloween night 1955, Harold met the love of his life, Donna Catherine Sapp. After a couple years of courtship, they were married December 27th, 1957. From this union came three wonderful children: Brian, Gail, and David.Harold worked as a land surveyor for Continental Engineers where he surveyed the Interstate construction of I-90 from Buffalo to Gillette. The family then transferred to Denver in 1961 where Harold continued surveying. He did the initial survey of the Eisenhower Tunnel east of Denver, walking over the continental divide in the Rocky Mountains. Harold later worked for Jefferson County Engineers in Golden, Colorado where the family grew up. The family later moved to Casper where he worked for Wyoming Department of Transportation. Harold and Donna moved back to Sheridan in 1988 where Harold worked as an industrial chemical salesman until his retirement.Harold’s wife, children, grandchildren, great grandchildren, cats Spike and Ripkin meant the world to him. The family had many great memories sitting together watching the Denver Broncos on TV every Sunday, win or lose. They had many great times going to the Big Horns Mountains with all the family camping, hunting and fishing. Harold enjoyed taking all of the grandkids down to Uncle Bernard’s store “The Stop n Shop Grocery” to get them some candy. He loved getting together with the family for all the holiday dinners. On Saturday nights they would get together and watch the U.F.C. fights.Harold was preceded in death by his brother Bernard, Parents and Grandparents. He is survived by his wife of 55 years Donna Harnish; children: Brian (Jill) Harnish, Gail (Ben) Johnson, David (Becky) Harnish; Grandchildren: Ashley (AW), Ben Jr (Jennifer), Jessica (Andrew), Ben (Jenipher), Jeremy, Kadi, Nichole (Jason), Kristen, Kelci; Great Grandchildren: Connor, Colter, Caitlynn, Trinity, Adelynn, Hudson, Aidan, Madison, Tyler, David, Annika, Tyler, Braydon, Jace; his brothers: Kerry (Carol) Harnish, Bill (Janice) Harnish; his in-laws: Alice Harnish, Dorothy McClain, Richard (Lorna) Sapp and numerous uncles, aunts, cousins, nieces and nephews.A Celebration of Harold\'s Life will be held at 11:00 a.m. on Monday, October 7, 2013 at The Bethesda Worship Center with Pastor Scott Lee officiating. A Reception will follow at the church.Memorials to honor Harold may be made to the Welch Cancer Center, c/o Sheridan Memorial Hospital Foundation, P.O. Box 391, Sheridan, WY 82801, the American Diabetes Association at 1701 N. Beauregard St., Alexandria, VA 22311 or to the Sheridan Dog and Cat Shelter, 84 East Ridge Rd., Sheridan, WY 82801.Kane Funeral Home has been entrusted with arrangements.