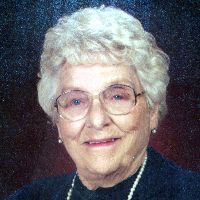 Pat Ebzery passed away in Sheridan, Wyoming, on December 30, 2014, of natural causes after a brief illness.She is preceded in death by her parents, Ben F. Knuth and Mary H. Pehl; her husband, Kenneth in 1971; and her daughter-in-law, Evie in 2011.Pat was born August 21, 1921, in Mitchell, SD, to Ben Knuth and Mary Rose. After finishing high school in Campbell, MN, she attended Stephens College and The University of Nebraska.She married Kenneth Ebzery on December 27,1941. With the exception of duty stations in Bremerton, WA and Thermopolis, WY, where Ken was stationed in the US Navy, Pat lived her entire adult life in Sheridan, where she raised three children.Pat had a zest for life and a wonderful sense of humor. She loved to travel and was fortunate enough to have visited many places all across the world. While she enjoyed golf and tennis, one of her true joys was fishing. Pat spent a lot of time with her niece, Lisa (Stoneback) and brother-in-law, Howie (Vierling) fishing for King Salmon in Alaska and Canada.She moved in 2010 from the family residence on Victoria Street where she had lived for over 60 years to Sugarland Ridge. It was there that she would keep tabs on her extended family, following the lives of her children, grandchildren, and great-grand-children - all of whom she was so proud.Despite her advancing age, she never lost the twinkle in her eye and an eternally young spirit.Lovingly known as “Geeps” to her adoring family, she is survived by three children - Susan Sullivan (Dan) of Casper; Tom (Julie) of Billings; Bill of Sheridan, 6 grandchildren (Danl, Kelly, Bryan, Aly, Matt, and Katie) and 4 great grandchildren (Finley, Preston, Evie, and Margot).The Ebzery family would all like to thank the wonderful nurses and aides at Sugarland Ridge, who made her last days and years as comfortable as possible.Cremation has taken place and a memorial/celebration of her life will occur in 2015 when all family members are present.Goodbye for now Geeps. As matriarch of the Ebzery family, we’ll miss you terribly, but we are all honored to have been part of your long and rich life.You were truly one-of-a-kind.Memorials may benefit the Welch Cancer Center at Sheridan Memorial Hospital Foundation, P.O. Box 391, Sheridan, WY 82801.Kane Funeral Home has been entrusted with arrangements.

Date:
Start Time:
A memorial/celebration of her life will occur in 2015 when all family members are present.
Location:
Tribute VideoService VideoService Brochure