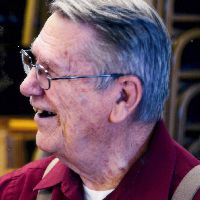 View Service Folder | Click for Video Tribute Harvey Finch, 91, of Sheridan, passed away on Wednesday, March 25, 2015, at the Sheridan Manor.Harvey was born on November 2, 1923, in Rome, NY, to parents Harvey and Alice (Husted) Finch. After graduation he joined the US Army Air Corp serving from December 1941 to November 1945. He then re-enlisted in the US Navy serving from April 1945 to May 1953. He married Rosetta (Thomas), then after her death, he married Genene (Gardner) in 2001.Harvey was a social person, he enjoyed cards, bingo, fishing, hunting, camping and gardening. He was active in Church, Military – Army Air Corp and Navy, and participated in the Honor Guard Flight. His greatest joy was spending time with his family. He was a member of the American Legion, Elks and the First Baptist Church.Harvey was preceded in death by his parents, first wife, Rosetta, one brother and two sisters. He is survived by his wife Genene, his children, John (Patricia) Finch of Quartzite, AZ, and Tom (Barb) Finch of Sheridan, WY, his step children, Evelyn Gernaat, Kathy Courtney, Nick Simque and David Simque along with numerous grandchildren, great grandchildren and great great grandchildren.A Visitation will be held from 6 to 8 p.m. on Monday, March 30, 2015, at Kane Funeral Home. Services will be held at 10:00 a.m. on Tuesday, March 31, 2015, at Kane Funeral Home with Pastor John Craft officiating. Interment will be in the Sheridan Municipal Cemetery with Military Honors. A Reception will follow at the First Baptist Church.Memorials to honor Harvey may be made the Alzheimer\'s Association at 225 N. Michigan Ave., FL 17, Chicago, IL 60601-7633.Kane Funeral Home has been entrusted with arrangements.