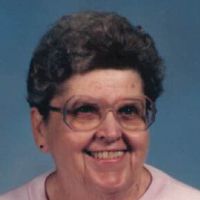 Helen E. Learn, 95, of Sheridan, passed away on Monday, April 11, 2016, at the Westview Health Care Center. She was born to Charles F. and Florence L. (Puckett) Montague on September 22, 1920, in Spokane, WA. She married James R. Learn on February 27, 1942, in San Diego, CA.Helen was a member of the First Christian Church in Sheridan,, the Story Woman\'s Club and the Story Garden Club. She had lived in Story since 1961, and had been active in church and community affairs in her younger years.Helen was preceded in death by her parents, husband, a brother and a sister. She is survived by her daughter, Linda (Al) Billings of Story, WY, son, Richard (Beverly) Learn of Conroe, TX, six grandchildren and fourteen great grandchildren.Cremation has taken place and at her request there will be no services.Kane Funeral Home has been entrusted with arrangements.

Date:
Start Time:
Cremation has taken place and at her request there will be no services.
Location:
Service VideoService Brochure