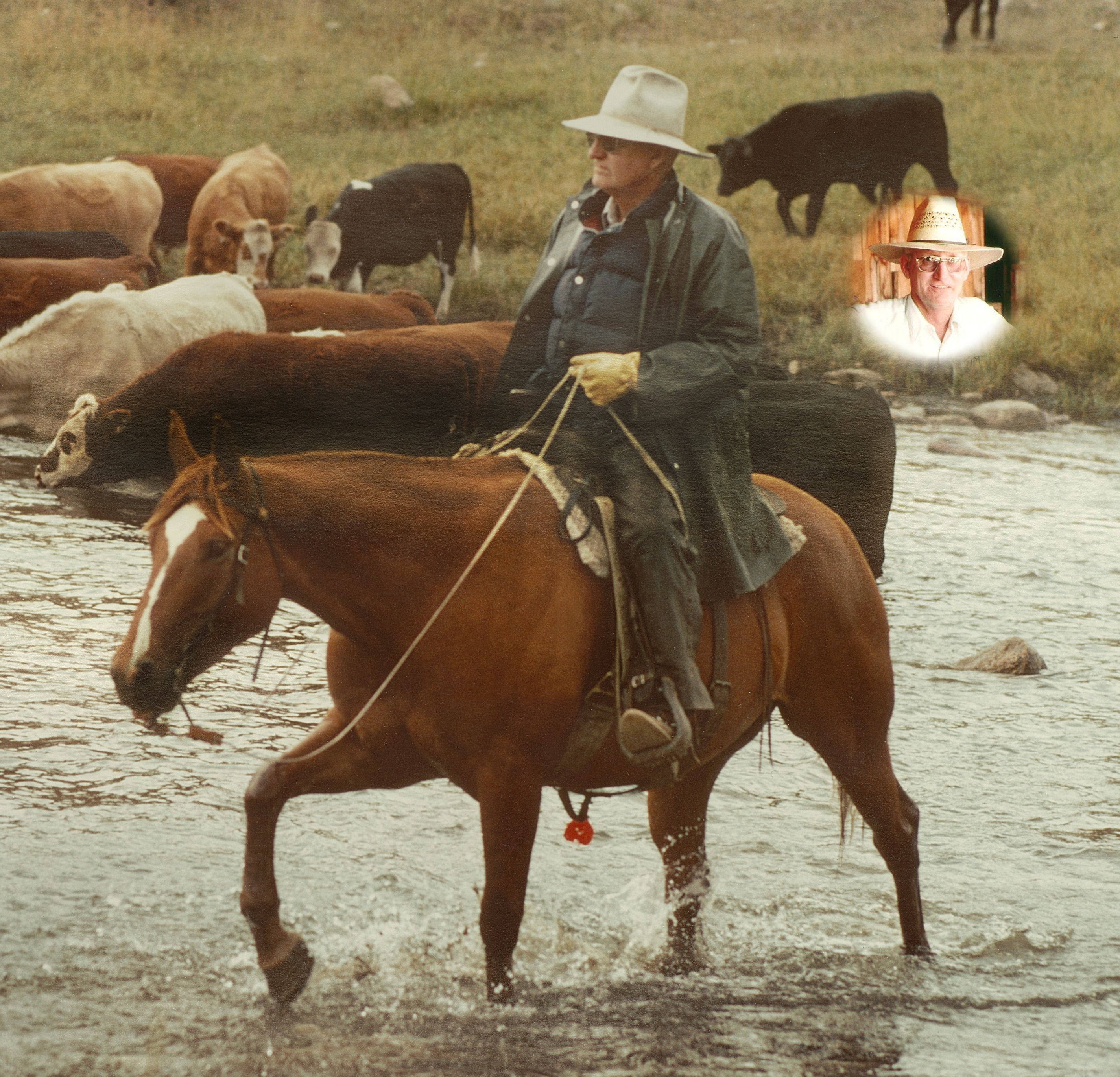 On December 17, 2021, Hank Scobee, age 94, passed away at the VA Medical Center in Sheridan, Wyoming. Hank was born Henry Albert Scobee on March 5, 1927 in Allen County, Kansas, the second child of George and Flossie Faulkner Scobee. In the spring of 1930, the family moved to a homestead in Converse County, Wyoming. Their house, built by Henry’s father, was a one-room tarpaper shack with a wooden floor. They didn’t have electricity or running water. Henry and his brothers, Bill and Clarence, went to school in Verse, Wyoming.

His sister, Georgia, was born on the homestead. The family called her “Sis”. When Henry was in the 4th grade, the family left the homestead and moved near Sheridan,

Wyoming. His sister, Rosie, was born in Sheridan. The family called her “Babe”. In 1939, Henry’s father leased a farm on Soldier Creek, near Sheridan. Henry finished 6 th , 7 th and 8 th grades at the Soldier Creek School.

In the summer of 1943, Henry heard that Sam McDowell was in Sheridan looking for cowboys to work the roundup for the SU Ranch, east of Lodge Grass, Montana. Henry was 16 when he hired on at the SU Ranch and started his life as a cowboy. He started as the horse wrangler and found time to work with young horses. He was out with the wagon, working cows and branding calves for the next two months.

Henry worked at the SU until he joined the U.S. Navy in 1945. During most of his Navy service, he was stationed on a troop transport ship, the USS Admiral W.S. Sims as a Seaman First Class.

He crossed the International dateline during five trips across the Pacific Ocean and became a member of The Domain of the Golden Dragon. Henry earned the American Area Campaign Medal and the World War II Victory Medal. After the War, Henry and his brother, Bill, hired on at the SU Ranch. This was about the time that everyone started calling him Hank. But to the Scobee family he was always Henry, Uncle Henry, Daddy or Grandpa.

In 1949 while working at the SU, Hank met his future wife, Lauretta Bradley. Hank and Lauretta married in May 1951, at Junior and Corinna Smith’s house on the SU Ranch. They moved to the Antler Ranch’s Long Tail Camp on Rotten Grass Creek (west of Lodge Grass) to work for Bill Greenough. In the summer time, Hank rode on the steers. In the winter time he fed cake to the steers. He worked for the Antler Ranch until they lost their lease on Rotten Grass Creek. He then worked for Barbara and Joe Hope at the EV Ranch and for the Belton Evans Ranch on Pass Creek.

In January 1956, Hank went to work for Farris Barnett at the Padlock Ranch, headquartered in Dayton, Wyoming. Hank spent the rest of his 50-year cowboy career at the Padlock Ranch. They moved to a Padlock camp called the Tucker Place, one mile north of the Montana/Wyoming state line. The camp was used for calving out the two-year-old heifers. Hank spent the first winter there feeding cows in the morning and building a calving shed in the afternoon.

Each summer the Padlock cowboys moved steers to the top of the Big Horn Mountains above Dayton, Wyoming, for summer pasture. Hank’s job was to ride on the steers there. So, Hank, Lauretta, Karen, Donna, George and John moved into the Padlock Ranch mountain cabin for the summer. They spent the next seven summers on the mountain, without electricity or running water.

The Padlock Ranch had a lease on the Kendrick Cattle Company’s Little OW Ranch on Tullock Creek, east of Hardin, Montana. In February 1963, the Padlock offered Hank the foreman job on the Little OW. It had five cow camps along 10 miles of Tullock Creek. The headquarters of that ranch was called the Ceded Strip. Hank was the foreman there for the next 15 years. They ran about 3,700 head of cows and branded about 3,300 calves each spring. During the first few years, Lauretta cooked for the branding crew. Then Hank hired a cook, set up a chuck wagon, a cook tent, fly and a bed tent for the men. Over the years his sons, George and John, many of the neighbors’ sons and several of Hank’s nephews worked for him during branding.

In the mid 1960s, Hank was given a black and tan hound named Lady. Hunting became his hobby. He hunted coons, bobcats, coyotes and mountain lions. He joined a houndsmen club and went to competitions in Montana and Wyoming.

In 1978 Hank transferred to the main ranch near Dayton. Hank and Lauretta moved to the Padlock’s Five Mile Camp, north of Ranchester, Wyoming. Hank was not only known as a good cowboy, but also a good judge of livestock. And he had a reputation for riding the horses that no one else would ride. Because of his life-long knowledge of horses he became the horse buyer for the Padlock for a few years. In the late 1970s and early 1980s, he went to the auction yards in Billings to buy horses for the Ranch.

In 1989 during the State of Montana Centennial celebration, Hank was designated a “Montana Centennial Cowboy”. Over the years various photographers went to the Padlock to document cowboy life. Hank’s picture was in several books and magazine articles. In 1991 Hank and Lauretta bought a house in Ranchester. In 1994 he retired from the Padlock and took a job as a part-time brand inspector for the State of Wyoming. He got rid of his hunting dogs and joined the Ranchester-Dayton Rotary Club, where he was a very active member for many years. He enjoyed making things with wood—birdhouses, small outhouses and wagons.

When he was 84, Hank retired from brand inspecting. Hank and his daughter, Donna, wrote a non-published story of his life experiences called “Hank Scobee, a Cowboy’s Life Story.” In 2015 Hank was the Living Inductee for District 7 in the Montana Cowboy Hall of Fame & Western Heritage Center. In May 2021 Hank and Lauretta celebrated their 70 th wedding anniversary at home with their children.

The family would like to thank the staff and caregivers at the Sheridan VA’s Mountain View Living Center for the wonderful care Hank received in his final months.

Cremation has taken place. Services will be planned at a later date. Please sign the guestbook and write a memory of Hank.