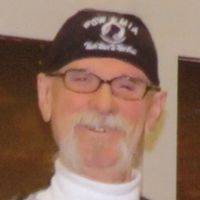 Hugh James Simmons, 64, of Sheridan, passed away on Friday, September 19, 2014, after a three year battle with Cancer at his home surrounded by his family and friends. He was born October 24, 1949, in Elkton, MD to John and Bonnie Jean (Stewart) Simmons. While growing up Hugh was an avid soccer player playing along side of Cal Ripkin Sr. After graduation in 1968, Hugh enlisted into the Marine Corps. After basic training Hugh spent a year in Vietnam where he was a crew chief on CH46 helicopters performing medical extractions.Hugh married Gloria Dougherty in 1968, they had a daughter Rebecca from this union. They later divorced.Hugh came to Sheridan in 1985, from Grand Rapids, MI, because he read the hunting was great. He was one of the lucky ones to draw a Moose License and get a Moose. Hugh enjoyed any kind of hunting, whether with a bow, rifle or shot gun. He especially loved hunting with his best friends, Donna and Tony Baumgartner who he affectionately called Ma and Dad. He was adopted into the Baumgartner family and became a big brother to Toni, Kayla and Billie Jean.Hugh will be known for his playful sense of humor and as the “idea man”. He was always coming up with ideas to get everyone involved. Hugh wanted to raise money for the Children\'s Christmas fund at the Big Horn Mountain Eagles one year so he set up a raffle and who ever won got to cut off his pony tail which he donated to locks of love.Hugh was a Charter member of the Big Horn Mountain Eagles 4169, VFW, American Legion, and Marine Corps League.Hugh was preceded in death by his brothers; Rusty and Danny of Maryland. He will be sadly missed by his adopted family and best friends, Donna and Tony Baumgartner, his sisters; Toni (Chad) Bates, Kayla (Josh) Morris, and Billie (Jason) Nelson all of Sheridan. His brother, Carl “Dawg” Salyards, Mesa, AZ, daughter, Rebecca (Willie) Rothwell of Chesapeake City, MD, grandchildren; Ashley and Alexis Bates, Mason and Spencer Morris, Emma, Royce, and Charli Nelson all of Sheridan, Renee and Willow Rothwell, of Chesapeake City, MD and great grandson, Milo Rothwell, of Chesapeake City, MD.A Celebration of Life will be held at 6:00 p.m. on Friday, October 24, 2014, (his birthday) at the Eagles Lodge in the Commercial Lane so that he may buy his friends, “one last toddy”.Semper Fi Marine Rest in Peace.Kane Funeral Home has been entrusted with arrangements.