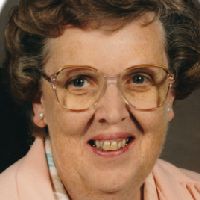 View Service Folder|Click for Video Tribute Irene Ruth Jackson, 86, passed away peacefully on Saturday, September 30, 2017 at Sheridan Memorial Hospital with members of her family by her side. She was born in Beckton, Wyoming December 29, 1930, to Henry and Marie (Arp) Dau, where she lived until the family moved to Yutan Nebraska when she was in the 2nd grade. After graduating from High School in 1948, she began working as a bookkeeper at the local lumberyard. She also helped her dad and the boys take care of the family home after the death of her mother in 1949. Irene moved back to Sheridan, Wyoming when her sister, Jean Yentzer, was widowed in 1955 to help her sister raise newborn Marcy, baby Terry and 11 year old stepson Sandy Yentzer. While helping with the children she met Sandy’s scoutmaster, Henry “Shorty” Jackson, and three years later, in 1958, they were married.She continued her career as a bookkeeper for the Credit Bureau 15 years, Jersey Creamery 11 years, and retired from Sheridan Memorial Hospital after 15 years. She is fondly known as “Aunt Rene“ to Marcy and Terry Yentzer. While she had no children of her own, she enjoyed her many nieces and nephews. The toy box in the corner of her living room was a favorite among them all. Of course, being the wife of a Scoutmaster she had an extensive scouting family as well. Irene commented from her deathbed that she loved her nieces and nephews even before they were born. She waited with great anticipation for the birth of her youngest niece and namesake. Baby Serenity Irene Hope Wagner was born just hours before her death. She enjoyed picnics in the mountains and fishing the mountain streams. She also loved to travel for fall colors, particularly to Colorado to visit relatives there. In the wintertime, she enjoyed tobogganing and playing with the kids in the snow and hunting Christmas trees. Her main hobby was collecting German Christmas ornaments on her travels. She loves Jesus and was an active member of Trinity Lutheran Church, participating in church programs, Sunday school and Steven’s Ministry. Her husband, Henry V. Jackson, her brother Richard Dau, and her sister Jean Yentzer precede Irene in death. She is survived by her brother, Gordon Dau and family, her sister-in-law Clara Jeanne Dolinar and family, her sister-in-law Carol Dau and family, and many cousins, nieces and nephews. Irene made a special friend of Denise Hylle from work at the hospital who became another “niece” in the family. Know that you are loved and will be missed AUNT RENE. A Visitation will be held from 6:00 to 8:00 pm on Tuesday, October 10, 2017, at Kane Funeral Home. Funeral Services will be held at 11:00 am on Wednesday, October 11, 2017, at the Trinity Lutheran Church with Pastor Phil Wold officiating. Interment will be in the Sheridan Elks Memorial Cemetery with a reception to follow at the church.Kane Funeral Home has been entrusted with arrangements.