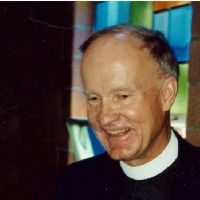 View Service Folder | Click for Video Tribute From beginnings on a North Dakota wheat farm on the Canadian border, Jug was the first of 5 children born to his Norwegian parents; his cultural heritage was a source of pride throughout his life. He was christened Irwin Milton Brandjord, going by Irwin until his Norwegian uncles nicknamed him ‘Jug-Head,’ inspired by the popular 1940’s comic strip and his prodigious appetite.After graduating from Bottineau High School in 1948, Jug’s National Guard unit was called to the Korean War. He served 2 years before taking advantage of the GI Bill to obtain a Geology degree from North Dakota State University. It was there in Fargo that Jug met Lois, the love of his life. They were married in 1954 and their union produced 4 children: Mary Beth, Peter, Eric and Amy.Jug worked in the North Dakota oil fields, then relocated to Durango, CO with Amarada Oil Co. Here he answered the call to ministry. Beginning with Presbyterian Seminary in Dubuque, IA, his 50 year ministry served churches in Andrew, IA, Sinclair, Saratoga, Casper and Glenrock, WY. He performed hundreds of marriages—including those for all four of his children and eldest grandson—and baptisms, including many of his grandchildren.Jug’s devotion to service included an interest in Drug and Alcohol Rehabilitation that led him to Yale University to become licensed. He plied these new skills at the Wyoming State Penitentiary part-time, and this experience led him to open Well-Being, a drug and alcohol Rehab Center in Casper. While operating Well-Being, Jug continued preaching part-time at Christ Episcopal Church in Glenrock. He retired and later served the Unitarian Universalist Fellowship in Casper.An affinity for creating and building began in his early farm days. Decades after leaving the farm it manifested itself in blacksmithing and numerous wrought iron creations both functional and artistic. Jug’s long-held admiration for adobe and rammed-earth houses, which he attributed to the earthen prairie houses of the plains of North Dakota, materialized in the Rammed Earth Building Systems company. Jug’s earth-built homes and buildings can be found in Torrington, Casper, Story, Sheridan, Big Horn, Ranchester, Lander, and Montana.Jug described his job as a minister as one of the best, because it required a great deal of reading. He always had a love of the written word and spent countless hours exploring everything from poetry and philosophy to science and comparative religion.Jug’s visionary courage remains an inspiration to those who shared his life, as enduring a legacy as the fruits of his counseling and ministerial efforts.Jug left this world just as he had lived his other days here-gracefully and peacefully with his devoted wife of 60 years steadfastly beside him.Jug is survived by his wife Lois; daughter Mary Beth (Michael) Evers, grandsons Joe and Nick; son Peter (Cindy), grandsons Seth (Stacey) and Luke; son Eric (Danae), grandsons Jordan, Kael, Thor and Trevor; daughter Amy (Justin) Shaw, granddaughters Emily and Elizabeth; sisters Helen (Jim) Stephens Evanston, IL; JoAnn Campbell, Riverside, CA; Jan (Larry) Nelson, Tuscon, AZ; brother Glenn (Vicki) Brandjord, Bottineau, ND; numerous nieces and nephews and countless friends. Thank you to all who were a part of his life.A Celebration of Jug’s life will be held Saturday, Jan. 24, at 11:00 a.m. at the Unitarian Universalist Fellowship at 1950 E. Brundage. Lunch will follow the service. A Memorial Service in Casper will be held this summer.Donations in Jug’s memory may be made to Green House Living for Sheridan, 2311 Shirley Cove or Alzheimer’s Association.Kane Funeral Home has been entrusted with arrangements.