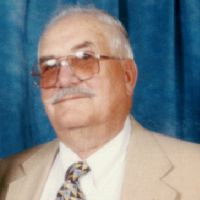 Jack B. Wilson was born on January 8, 1923 in Dayton, WY to Archie C. and A. Nadine (Reavis) Wilson. His parents at the time owned the corner grocery store at Dayton and he lived in what was known as the Smith Hotel (now White Horse Bed and Breakfast)), the place of his birth. He spent his early years in Sheridan County where he was educated. In 1940 his parents bought Meadowlark Lodge in Washakie County. From there Jack enlisted Nov. 28, 1942 in the Army during WWII. He received his basic training at Mineral Wells, Texas and was assigned to the 36th Infantry, 5th Army, M. Co. at Camp Edwards, MA; was shipped overseas April 2, 1943 embarking from New York. Jack served sixteen months in the North Africa and Italian Campaign. His company was one of first to land at Salerno, where all but 60 men were wiped out. He was wounded at Casino on December 8, 1943 and hospitalized at Naples. On his return to the United States in July he was stationed at Camp Claiborne, LA. He received his medical discharge in December from Fort Logan, CO.Jack married Connie J. Ponak March 2, 1945 at the Congregational Church in Sheridan. He briefly worked for Sheridan Coal Co., and was associated briefly with his father at Meadowlark Lodge. Mid-summer 1945 he went to work for the Wyoming Game and Fish Dept.; a career which he pursued for thirty four years. He was stationed at various places throughout Wyoming, the first being the State Fish Hatchery at Story. Other places included Rock River, Pinedale, Tensleep and Green River. The last ten years were spent as Game Warden at Buffalo.Jack graduated from the Wyoming Law Enforcement Academy while it was being held at the University of Wyoming. He also attended several specialized courses at the academy at Douglas.He was a member of the American Legion, a life member of the Mason Anchor Lodge #7 of Buffalo and the Elks Lodge, Kalif Shrine and Life Member of the Wyoming Peace Officers. He is also a member of the St. Peter\'s Episcopal Church.He was proceeded in death by his parents, wife Connie, son Dennis L. Wilson (Buz), daughter Vicki Lynn Wilson and grandson Trenton Wilson. He is survived by his sister Evelyn \"Libby\" Levy (Jess)Johnson,White Fish, MT. children Lana Cochran of Spokane, WA, Kirk (Julie) Wilson of Glen Allen, AK, seven grandchildren Debbie Cochran, Kelly Cochran, Jamie Cochran (Bill) Kowalski, Nacole Wilson (Jake) Hanson, A.J. Wilson, Kristal Wilson (Nathaniel) Bengston, Kirk Wilson Jr., eight great grandchildren, one great great grand daughter, and special friends, Linda and Ed Trimmer for their tireless devotion.A Memorial Service will be held at 11:00 on Saturday, August 1, 2015, at St. Peter\'s Episcopal Church with Father John Inserra Officiating. Inurnment will be in the Sheridan Municipal Cemetery with a reception to follow at the church.Memorials to honor Jack can be made to the Shriner\'s Crippled Children\'s Hospital, PO Box K, Sheridan, WY, 82801, or to the Red Door at 1 S. Tschirgi St., Sheridan, WY, 82801.Kane Funeral Home has been entrusted with arrangements.