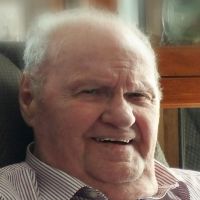 R.M. “Jack” Siler, 89, of Sheridan, WY, passed away at his residence on Wednesday, January 6, 2016 after a short illness. He was born on February 11, 1926, in Moore, Oklahoma, to parents Earl Maynard and Jonny Lula (Routon) Siler. He married Geraldine Terry in July, 1945 in Oklahoma. They moved to Powell, Wyoming where Jack worked for an oil company. Later, they moved briefly to Casper then to Sheridan for 10 years. Jack and family then moved to Lander, WY in 1964 where he and Gerry lived until 2014 when they moved back to Sheridan. During his years in Lander he had the Standard Oil Bulk Plant after his retirement from Standard Oil he and Gerry owned Lander Furniture and Ace Hardware. Jack was a proud 32nd degree Mason for 70 years. As part of his Masonic service he served as chaplain of the Korean Temple. He later functioned as an adult advisor for both Jobs Daughters and DeMolay. For many years he sponsored both male and female softball teams through Ace Hardware. Jack always remembered his participation with younger people fondly. He had been very active in Blue Lodge, Jesters, the Lander Shrine Club, was a lifelong member of the B.P.O. Elks as well as many other organizations. Jack was a member of the United Methodist Church in Lander. In his retirement years, Jack enjoyed the Lander Senior Center and his many friends there.Jack was preceded in death by his parents, one sister and four brothers. He is survived by his wife Gerry of Sheridan, son Richard (Susan) Siler of Powell, WY, daughter, Sharyn Siler and her husband, Art McCulloch of Sheridan, grandson, Paul Siler (Gwendolyn) , and three great grandchildren, Alanna, Brayden and Xander Siler, as well as sister, Betty Irene Siler of Oklahoma, and many nieces and nephews.A Celebration of Life will be held in Lander, WY, in the spring.Kane Funeral Home has been entrusted with arrangements.

Date:
Start Time:
A Celebration of Life will be held in Lander, WY, in the spring.
Location:
Tribute VideoService VideoService Brochure