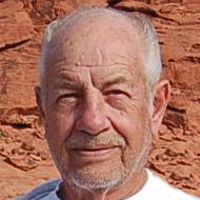 Click Here For DirectionsJack W. Sparre was born August 9, 1943 in Sheridan, Wyoming to Bearden Ehrich Sparre and Swend Sparre. He passed away September 12, 2013.Jack grew up in Buffalo, Wyoming, and joined the Navy where he was stationed at Pearl Harbor, Hawaii, before being deployed to Vietnam on a submarine. While in the Navy, he received training as an electrician. Following his military duty, Jack opened his own electrical business. He then became a master electrician, specializing in industrial electric, where he enjoyed doing the big jobs.In 1983, he married Diane and after following electrical work around the country, they eventually settled in Sheridan, Wyoming, where they raised their daughters. Together they enjoyed the outdoors camping, boating, four-wheeling, snowmobiling, and watching Steelers football —although Jack would not claim a particular team. During his retirement he did repair projects and remodeling, always seeking perfection.Jack was preceded in death by his parents, step father Walt Tyler, and sister Rose Bear. He is survived by his wife, Diane; and daughters Dena Belus and husband Mark of Sheridan; Kathy Lyche and husband Jeremy of San Diego; Kinsey Sparre and husband Thomas Dale of Chesterfield, VA; and Hayley Sparre of San Diego. He also is survived by his four grandchildren: Bo Sparre of Sheridan, Reno Skinner of Sheridan, Kailey Lyche of San Diego, and Elizabeth Lyche also of San Diego.A graveside service will be held on Monday, September 16, 2013, at 2:00 pm at the Willow Grove Cemetery, Veterans section, in Buffalo, WY. A reception will be held at the Sparre residence in Sheridan, WY.