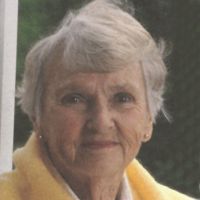 Jacqueline Proctor de Brun, 91, died on August 3, 2013, in the Ranchester, WY, home of her daughter Pam Keller, with whose family she had lived since June 2011. She had been diagnosed recently with an advanced-stage cancer.The daughter of Edward Otis Proctor, a prominent Boston attorney, and Fernande Girod, Jacqueline was born in Boston, MA, in December 1921, the second of three children, and grew up in Newton Center, MA. She attended Abbott Academy (Andover, MA) followed by the Erskine School in Boston, where she studied drama.In the early 1940s, she completed a year of volunteer work with the MA Women\'s Defense Corps. She also worked a defense job with American Airlines, making priority reservations for the Army and Navy. In April 1943, she married Guy de Brun, of New York City, with whom she shared an itinerant life of more than 57 years. Places where she lived more than five years included Lafayette, IN; Branford, CT; Yarmouth, ME; Charlotte, NC; and Harrisonburg, VA, where in the year 2000, she and Guy moved into the Virginia Mennonite Retirement Community. During her early years in Lafayette, she acted in numerous productions of the local Little Theater, sang tenor in a church choir, organized neighborhood picnics and square dances, and volunteered at the Veterans Home. Her various occupations in other sites included teaching both nursery and elementary school, working in sales for a Christian publisher, working with local youth groups, and serving as minister’s wife in a rural parish.Jacque, as she was known, had a zest for life and was, above all, a devoted wife and mother of four offspring. She also loved good food, sports, and music and theater, and was an avid Red Sox fan until the very end. She held a special place in her heart for the Maine coast, where in later life she vacationed frequently.Her husband Guy, her brother Ned Proctor, her sister Madeleine Woodward, and her son-in-law John Duffy predeceased Jacqueline. She is survived by her four children: Jeanne Duffy of Gettysburg, PA; Harlan de Brun (Harrisonburg, VA); Pam Keller (Ranchester, WY); and Brian de Brun (Charlotte, NC); and three of their spouses: Claire de Brun (Harrisonburg); Dan Keller (Ranchester); and Eva de Brun (Charlotte). Jacqueline also left 13 grandchildren, 25 great-grandchildren, and one great-great grandchild.Her ashes will be divided and dispersed in Charlotte, NC, where her husband’s are buried, and Deere Isle, ME, on her son Harlan’s property. Kane Funeral Home of Sheridan, WY, is entrusted with arrangements.