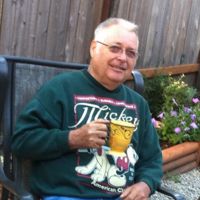 James F. Bonine, 74, of Story, WY, passed away on September 18th, 2016 at Sheridan Memorial Hospital surrounded by family members.As per Jim’s wishes, no funeral will be held in his memory. He has chosen to wait for his wife, Sheri as they loved to do everything together.Jim was born in Tacoma, Washington on November 17, 1941. He graduated from Monroe High School in 1959. He then enlisted in the Army and spent one year in Seoul, Korea. After his time in the service, he lived in Riverside, CA, where he met his first wife and they had 3 sons together, James, Marvin and Kenneth Bonine, from there he moved to Washington State and completed his training to become an electrician. Nevada was his next stop where he worked in several mines before meeting his wife Sheri. Jim and Sheri were married in March of 1975, they raised Sheri’s two children, Deb and David MacArthur and lived a full life. They moved to Wright, Wyoming in 1978 where Jim finished his career at Black Thunder Mine in 1999 and retired to Story, Wyoming. After retirement, Jim worked in Sheridan, Wyoming at Ace Hardware for 8 years.Jim’s hobbies included planes, trains, and automobiles and the constantly changing list of “honey-do’s” Sheri provided him every year. He loved his family and always had a smile and a kiss waiting for Sheri.He was preceded in death by his parents, Albert and Nellie Bonine.Jim is survived by his wife, Sheri. His daughter Deb Baumert and husband Mike, of Gillette, WY. His son David MacArthur and his wife DeeDee of Elko, Nevada. His sons James and Marvin, both of Texas; Kenneth, of Florida. His sister, Lona Larson and her husband Todd of Granite Falls, WA. As well as, 11 grandchildren, 3 great grand children, and numerous nieces and nephews.Sheri has requested that donations be sent to the Story Volunteer Fire Department, (PO Box 4, Story WY 82842).Kane Funeral Home has been entrusted with arrangements.