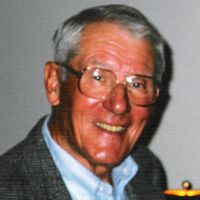 Click Here For DirectionsObituaryJames F. NortonIn 1945, as he lay in a hospital bed in France recovering from wounds received in the Battle of the Bulge and aggravated by months in a German POW camp, Jim Norton wrote these words to his parents:I’ll never forget as long as I live when I saw that first Yank, I always said I’d kiss the first one I saw who liberated us, even if it were a 2nd Looie, and you guessed it, he was. He was more surprised than I, and I imagine it’s the first time in history an officer has ever been kissed by an enlisted man . . .My biggest concern and something that has always been on my mind is how you two are and how the Missing in Action affected you. But you are both brave, strong parents, so I’m sure everything is all right. . . Death has faced me many times in the past months, and by the grace of my Lord and Savior I am here today to write this letter.As he had served his country as a young man, Jim Norton would go on to serve his family, friends, community and nation for 68 more active and eventful years. Born in St. Paul, Minnesota to John and Harriette Norton, he attended the University of Minnesota on the GI bill and graduated with a degree in business and journalism. He rose through the insurance publishing ranks to become CEO of R&R Newkirk, Inc., of Indianapolis, which eventually became a division of ITT.Over the years Jim and his wife Mary made annual trips to their favorite vacation spot: Eaton’s Ranch. When he “retired” they moved to the Powderhorn community in Sheridan, where Jim could golf, Mary could ride, and they could together enjoy the West and the mountains they had come to love and the many friends they had made in Sheridan.In his so-called retirement years, Jim maintained an active consulting practice and became deeply involved in his new community. As president of the Sheridan Inn Heritage Center he fought tirelessly to preserve this piece of Sheridan’s past. He also served on the governance board of Volunteers of America. As VOA president Jeff Holsinger notes, “Jim took the time to tour almost every program we operate throughout Wyoming and Montana. At times I knew he was very tired but he stayed the course.”For all his many commitments, Jim always found time to spend with his family: his beloved wife, Mary, his daughters Mary McConnell, Sarah Lawhorn, and Ann Norton, and stepdaughters Kate Hurson and Liz Fanning. To his 13 grandchildren and 4 great-grandchildren Jim was “Grandpa War Eagle,” a bottomless fount of stories and fun. We will all miss him.Services for Jim will be held at Kane Funeral home on Wednesday, November 6 at 10:00 a.m., followed by interment at Ft. Snelling military cemetery in St. Paul, Minnesota. In lieu of flowers, the family requests that donations be made to Volunteers of America Northern Rockies in Jim’s honor. Please make checks payable to Volunteers of America Northern Rockies (VOANR) and mail to: Volunteers of America Northern Rockies, 1876 S. Sheridan Ave.,Sheridan, WY 82801.Kane Funeral Home has been entrusted with arrangements.