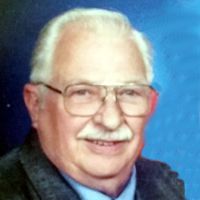 James H. Weber, 86, of Sheridan, passed away on Wednesday, March 2, 2016, at home with his family by his side. He was born November 14, 1929, in Bozeman, MT, to Henry T. Weber and Florence M. (Justice) Weber. He attended elementary and high school at Holy Rosary in Bozeman and graduated from St. Patrick’s High School in Billings, MT. After attending Montana State College for one year, he returned to Billings and was employed by International Harvester Co. He enlisted in the U.S. Army in 1950, and spent three years in Germany. After discharge he returned to work for International Harvester Co.Jim met the love of his life on July 14, 1949, in Roundup, MT, and was united in marriage to Mitzi M. Vedova on February 27, 1954, upon return from the service and they continued to live in Billings. In January 1962, Jim became part owner of Valley Motor & Implement Co. (aka Valley Motor Honda) in Sheridan, WY, and remained involved in that business until retirement. He was a member of Rotary, Chamber of Commerce, YMCA and Holy Name Catholic Church.In the late 1960s and 1970s, Jim and Mitzi spent most of their weekends transporting the many swimmers in their family to swim meets in Montana, the Dakotas and Wyoming. Jim was elected president of the Wyoming A.A.U. in 1974. Jim was Executive Secretary of the Sheridan Rotary Club from 1999, until his death. In 2011, he was honored as “Humanitarian of the Year”.Jim was preceded in death by his parents, a younger brother, Robert, a son, Robert and a daughter, Julie. He is survived by his wife Mitzi, a brother Paul and his wife Louann, three sons: Dick and wife Louann, Ken, Tom and wife Julie, three daughters: Karen and husband Steve Olson, Lynn Weber-Loe and Patty and husband Russ Cox. There are thirteen grand-children and sixteen great-grand children.A Memorial Mass will be held at 10:00 a.m. on Saturday, March 5, 2016, at Holy Name Church with Father Jim Heiser officiating. A reception will follow in the parish hall.Memorials to honor Jim may be made to the Sheridan Senior Center at 211 Smith St., Sheridan, WY 82801 or to The Sheridan Dog and Cat Shelter at 84 East Ridge Rd., Sheridan, WY 82801.Kane Funeral Home has been entrusted with arrangements.