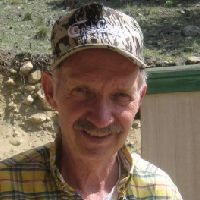 James Robert Porter, 76, of Sheridan, passed away on Tuesday, February 25, 2014 at the Sheridan Memorial Hospital with family at his side.Jim was born on June 9, 1937 in South Connellsville, PA, to parents John Arnold and Margaret Kathlene (Pierce) Porter. In 1956 he made his home in Cody, WY. He served his country from 1958 to 1962 in the Army. He married Judie Underwood in 1961and had 2 children, Julie & Buck. He remarried after her passing to Judy Million and had 1 son, Jimmy.Jim worked for 30 years as an outfitter in the Wyoming Mountains. He loved carpentry, hunting, fishing and spending time in the great outdoors. He made many friends at Bench Rest Shooting competitions throughout the country.Jim was preceded in death by his parents, brother, and grandson, Justin “Winchester”. He is survived by his children; Julie (David) Bettcher of Sheridan, WY, Buck Porter of Cody, WY, Jimmy (T.K.) Porter of Loveland, CO, grandchildren; Heather, Christy, Tom, Angie, Bailey, Autumn, Justin, great-grandchildren; Siena and Silas, and Nancy Porter and other family and numerous friends.A family gathering in Jim\'s memory will be held at a later date.“Off to the Great Hunting Grounds, as it should be......”Kane Funeral Home has been entrusted with arrangements.