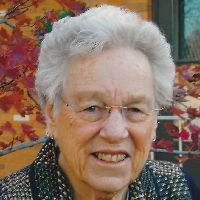 Jean S. Muller, 89, Buffalo, Wyoming, passed away Tuesday, June 26, 2018 at the Billings Clinic Hospital in Billings, Montana.Jean was born June 29, 1928 to Walter and Katherine (Kate) Snyder in Sheridan, Wyoming.  She graduated from Sheridan High School in 1946. Jean married James (Jim) Muller in 1946.  Together they ranched and raised a family in Decker, Montana until their retirement in 1988, when they moved to Dayton, Wyoming.  In 2008, they moved to Sheridan, Wyoming where they resided for the next eight years. In 2017, Jean moved to Buffalo to reside at Agape Manor.Jean was very active on the family ranch, in the Decker Women’s Club and with the Decker community.  Jean enjoyed traveling, spending time with her children, grandchildren and great grandchildren.  She especially enjoyed cattle and did not miss many chances to watch her grandchildren show cattle.  She also attended the grandchildren’s ball games as well as rodeos.Jean was preceded in death by her husband, Jim, parents, one brother, Al Edwin Snyder and son-in-law, Frank Schrater.  She is survived by her five children, Sharon (James) Freeman, Great Falls, MT; Roberta Schrater, Buffalo, WY; Linda (Richard) Carr, Banner, WY; Gary Muller, Laurel, MT; and Marcia (Kip) Gillis, Wolf, WY.  She is also survived by grandchildren Lisa (Kevin) Freeman-Cook, Lori (Dominique) deVangel, Steve (Shawna) Schrater, Tami (Juel) Afdahl, Jamie (Shawn) Sayer, Cara (Chris) Watson, Heather (Jesse) Maslowski, Ryan (Vaida) Gillis, and sixteen great-grandchildren. She was expecting to meet her first great-great-grandchild in August.Graveside Services will be held Monday, July 2, 2018 at 11 AM at the Sheridan Municipal Cemetery with Pastor Dan Keller officiating and Kane Funeral Home in charge of arrangements.  There will be a reception following the service at the Kane Funeral Home Reception area. In lieu of flowers the family requests that any memorials be made to the Juel Afdahl Medical Fund in care of Marcia Gillis, 400 Wolf Creek Road, Wolf, Wyoming 82844. Juel is fighting Brain Cancer and he was in her thoughts and prayers to the very end.Kane Funeral Home has been entrusted with arrangements.

Date:
Start Time:
Graveside Services will be held at 11:00 am in the Sheridan Municipal Cemetery .
Location:
Tribute VideoService VideoService Brochure