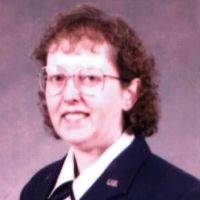 Jean Marie Peterson-Garnett passed away on Thursday, October 27, 2016, at the VA Medical Center in Sheridan. She was born to Winnifred Curry-Peterson and Virgil Peterson on July 14. 1957. She grew up in the Platte Valley area of Encampment and Saratoga and graduated Bertha High School in 1975. Jean married Joel Garnett on April 12, 1978. In April of 1980, they both decided to join and serve together in the United States Air Force, serving in Okinawa, Japan as well as numerous other places around the world. She was a Russian Linguist for the 6990th Electronic Security Group. She was among the first women at that time to attend the academic airborne and in 1997, was assigned to the Air Force Space Command and ran the intelligence office (DOMI) at F.E Warren in Cheyenne, WY. Jean has had numerous awards and accommodations throughout her illustrious 18 year military career. She has inspired many in her family to answer that call to our nation due to her exemplary courage and fortitude. When she retired in 2001, they settled in Clearmont, WY, until her death.Jean is survived by her husband Joel Garnett, mother Winnifred Currey Peterson, brother, George Allen, sisters, Connie Hazard and Susan Hoem, numerous nieces and nephews as well as many aunts and uncles. A Celebration of Life with Military Honors will be held at noon on Saturday, November 5, 2016, at the Clearmont Community Church in Clearmont, WY. A Committal Service will be held at the family plot in the Riverside/ Encampment, WY, area at 11:00 a.m. on November 12, 2016. The family asks that instead of flowers to please send donations to SESCER, PO Box 181, Clearmont, WY 82835.