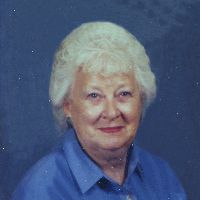 Jeanine P. VanBerkom Germain, 86, of Sheridan, passed away on November 9, 2015 at Westview Nursing Home.She was born on May 28, 1929, in Powers Lake, ND, to parents John Henry (JH) and Floy Hilborn VanBerkom. She learned to drive in a Model T in the old rocky pasture when JH left her there with her sisters, saying, “See you at home.”Jeanine moved from Bismarck, ND, in 1991 when she accepted a job transfer with MDU. Sheridan became home in her heart in a way that no other place could ever be. She retired from MDU and enjoyed knitting sweaters, reading murder mysteries, and shopping on QVC. When she found something that she liked on QVC, you could be certain that many of her family members would get one—each in a different color. A staunch member of the Republican Party, she enjoyed attending local conventions and then sending the paraphernalia to her grandchildren. She was a member of AAUW and was a reader at many funerals at Holy Name Catholic Church.Jeanine was preceded in death by her parents, and sister, Carol. She is survived by her children, George (Chris Walker) Germain of Gillette, WY; and Elizabeth (David) Widman of Huntingdon, PA; her sister, Shirley Sackman of Rapid City, SD; her brother, Dale (Joann) VanBerkom of Hawley, MN; and three fabulous grandchildren.A visitation will be held at 6:00 with the Rosary at 7:00 on Wednesday, November 18, at Kane Funeral Home. Mass will be held at 10:00 on Thursday, November 19, at Holy Name Church with Father Michael Ehiemere officiating. A reception will follow in the parish hall. Inurnment will be in the Sheridan Municipal Cemetery at a later date. Memorials to honor Jeanine may be made to the charity of your choice. Many years ago, Mom asked us to celebrate her life with a drink. Please raise your glass at 7:30pm on Thursday night and join us in recognizing a woman who made her own choices.Kane Funeral Home has been entrusted with arrangements.