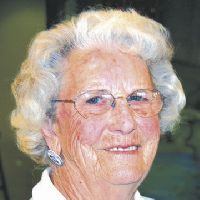 View Service Folder | Click for Video Tribute Longtime Sheridan resident Jeanne M. Owen passed away on August 14th, 2015, at the age of 91. Jeanne was born on Sept 9, 1924, to Harry and Juanita Mann in Billings, Montana. She was the youngest of four girls, raised on the Pryor Mountains. Their family lived at the Chief Plenty Coops Museum in Pryor Montana. Her Father was the Montana State Senator for a term. Jeanne lived half the term year in Helena during legislation and the other half in Hardin or at their ranch in Pryor. Jeanne learned to sip tea with the politicians, various ranch duties including working cattle to cooking for hungry cowboys. She met Jack Owen when she graduated from high school and then married on March 25, 1943. They where married 54 years, when her sweetheart passed away. She was a wife, mother, cook and the best hand on horseback one could ever ask for. They ranched on Corral Creek east of Lodge Grass Montana all their married life. Jeanne was a true western lady, rodeo queen, loved to entertain with the finest flair, and enjoyed ever minute of it. Jeanne raised her nephew, Billy Willcutt, until he was 4 years old. Jeanne helped raise her husband’s nieces and nephews, and whoever else needed a loving hand.Jeanne was preceded in death by her parents, husband Jack, sisters, Louise Mary, Doris, and Betty. She is survived in death by her daughter Banita Lee and husband Ray McCarn of Sheridan, WY, two beautiful granddaughter’s Ashlee Kukuchka and husband Cameron, McKenzie Quigley and husband Josh. Five great grandchildren; Kason and Karlee Kukuchka, Alexus, Lenon, and Jaxon Quigley.Services are planned for Friday, August 21, 2015, at 11:00 am at the Elks Club located at 45 West Brundage Lane, Sheridan, WY.In lieu of flowers the family wishes to have donations made to the Elks Youth Rodeo at 45 W. Brundage, Sheridan, WY 82801.Kane Funeral Home has been entrusted with arrangements.