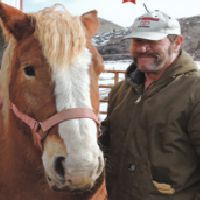 Jeff Gorzalka passed away peacefully at his home on Tuesday, March 3, 2015 at the age of 57.He was born on December 8, 1957, to Alois James and Frances Elaine (Pinder) Gorzalka.Jeff enjoyed volunteering at CHAPS. He loved all the horses and knew everyone of them by name. He\'d even tell you about each of their different personalities and about what kind of mood they\'d been in. The one thing Jeff let everyone know was just how much those horses helped him overcome some of life\'s many struggles. He happily shared about how they helped not only build his self-confidence, but also his self-worth.The real loves of his life were his two grandchildren, Zander and Lawrence. He\'d just light up whenever he shared stories about them.Jeff was preceded in death by his mother, Frances, and his grandparents, Mary (Kobielusz) Dolinar and John and Anna (Sikora) Gorzalka. He is survived by his sons, David and Justin (Jenna), his father, Alois Gorzalka, his siblings, Nancy Reinke (Dan) Rederth, Jim (Dana) Gorzalka and Natalie (Kelly) Peabody, his grandchildren, Zander Gene and Lawrence Alois Gorzalka, and his four nieces and two nephews. He is also survived by an endless list of cousins, all of whom he cared for deeply.A Celebration of Life will be held at 2:00 on Friday, March 13, 2015, at Kane Funeral Home with Tri Robinson an Ordained Minister of the VOA officiating. A Reception will follow at the Elks Lodge.Memorials to honor Jeff may be made to CHAPS Equine Assisted Therapy, PMB 201 1590 Sugarland Dr., Ste. B, Sheridan, WY 82801.Kane Funeral Home has been entrusted with arrangements.