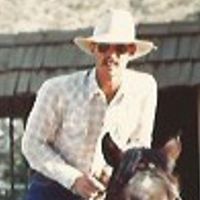 Jeffery Lyle McKenzie, 66, of Plush, Oregon died peacefully on March 18th, 2018. Jeff was born in Denver, Colorado on August 16th, 1951 to Esther Katherine Gates-McKenzie and Roger McKenzie. At a young age, Jeff’s parents moved around a lot from Denver, then to Roseburg, Oregon, and soon leaving there for Helena, Montana until finally settling in Sheridan, Wyoming where his mother still lives today. Growing up, Jeff embraced his true talent as a swimmer until he quickly realized his real passion in life was cowboying. This is when he found himself working at Eatons’ Ranch in Wolf, WY outside of Sheridan as a Wrangler with many of his lifelong friends. Not only was he a remarkable cowboy, but he enjoyed training and jumping horses, playing polo, and even tried his hand at bareback riding. After meeting and marrying his wife, Rosanne, they settled in Plush, Oregon where they had three kids, Colin, Daniel and Katherine-- about whom Jeff was never shy to brag about. He very much appreciated a good joke, arrowhead hunting, reading, and his kids.He is survived in death by his three children and his mother, Esther. He was preceded in death by his father, Roger, and his older brother, Michael. Contributions in Jeff’s memory can be made to Meals on Wheels in Sheridan, Wyoming, the Lake County Round-Up Association, and the Warner Canyon Ski Area.