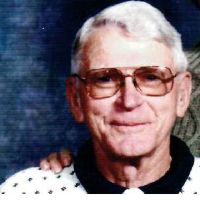 Jene Payton Moore, 87, of Sheridan, passed away on Monday, November 2, 2015, at the VA Medical Center.Jene was born on April 26, 1928 in Afton, Oklahoma to James Payton and Eunice (Montgomery) Moore. He was very athletic and was part of undefeated football and basketball teams for 2 seasons in high school, as well as being one of only two people to get a 4 sport letter in the history of his school: football, basketball, tennis and track .Jene served in the U.S. Army from 1945 to 1948 in small arms ordinance and as a weapons mechanic. He participated in the occupation of Japan. Was honorably discharged, returned to the states and married Edna Sipes on December 26, 1948.He worked in the surface coal mines of northern Illinois while raising his family and then moved to Sheridan, Wyoming to work in the mine at Decker, Mt. He retired from Decker Coal Mine after 20 years in October 1991. He was a member of the Congregational Church in Sheffield, Illinois.Jene was a kind, generous man who was loved and respected by all who knew him. He enjoyed hunting, fishing and being in the mountains. Jene also volunteered at the VA for many years after his retirement. He loved being a family man, taking care of his home, family and especially his wife, Edna.Jene was preceded in death by his parents, his sister Marcia Van Cauwenburge, and grandson Gabe Van Boven. He is survived by his wife, Edna Moore, of Sheridan, WY, children, Jena (Tom) Atkinson of Sheffield, IL, Sandy ( Bryan) Turpin of Henry, IL, Brent (Dia) Moore of Sheridan, WY, nine grandchildren, sixteen great-grandchildren, and one great-great-grandchild.Memorials to honor Jene can be made to the National Multiple Sclerosis Society, 2112 Evans Ave, Cheyenne, WY, 82001. (Please put Jene Moore name on memo line).A Memorial will be held at a later date.Online condolences may be written at www.kanefuneral.com.Kane Funeral Home has been entrusted with arrangements.

Date:
Start Time:
A Memorial will be held at a later date.
Location:
Service VideoService Brochure