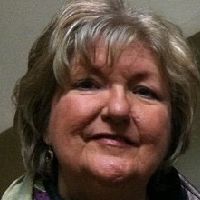 Jerie Ann Meeks was born at home to Viola and G. Arnold Miller on October 15, 1940 in Bozeman Montana. She spent much of her childhood as a “South Dakota princess” making many memories of Sioux Falls and Mitchell. Her parents returned to Montana, resettling in Billings where she completed high school and graduated from Eastern Montana College with a BS in education. She met and married James A. Meeks and had two children, Blake E. Meeks and Margaret (Meg) Donohue. Jim died in office as Yellowstone County Sheriff in 1972. Jerie then met and later married Kermit Krokker, spending the next 41 years being his best friend and lover. For several years they lived on North 32nd in Billings, where she offered a safe refuge, support and guidance for over 50 children and rookie adults in her basement apartment. She completed a MS in special education with honors from EMC during this time. In 1982 Kermit found employment with the VA Hospital in Sheridan and Jerie established the guidance program for elementary and middle school students in Ranchester Wyoming. She made her home in Sheridan, falling in love with the beauty of the trees, streams and mountains for the remainder of her life. She is survived by her husband, a son Blake, his wife Katrina and their daughter Ellie of Butte, a daughter Margaret (Meg) Donohue, husband Dan and their daughter Maddie and her husband, Aaron, and two great grandchildren (Leona and Josie)of Twisp, Washington. Three years ago, to her great surprise and infinite delight, she was contacted by her unknown stepson, Piikalama Boiser, conceived by first husband Jim(a Pearl Harbor Survivor) while he served at Pearl Harbor at the beginning of the war, who, with his wife Noeau, has fit right into the family. She is also survived by her beloved siblings; David Miller (Diane), Evelyn Moyer, Willa Lewis (Bill), Will Miller (Esther,) Spencer Miller (Brenda) and Lois Norwood; and their children and grandchildren. She leaves behind many devoted friends and partners in adventure; Sue Traher, Deb Tedstrom, Ana Schultz and Lucinda Staufer (Lina), apologies to those I forgot to mention.As Jerie said,” Walk toward the sun and the shadows will be behind you”, and “If in doubt do the loving thing.” Her wisdom and guidance will be missed and she will continue to be an inspiration to us all.When you die people will not care what kind of car you drove or the size of your house or how much money you had, but what makes a life important is that you made a difference in the life of a child.A gathering of friends and family and celebration of a life well lived will be held on the Bighorns on July 5th, directions provided on request.Kane Funeral Home has been entrusted with arrangements.

Date:
Start Time:
A gathering of friends and family and celebration of a life well lived will be held on the Bighorns on July 5th, directions provided on request.
Location:
Tribute VideoService VideoService Brochure