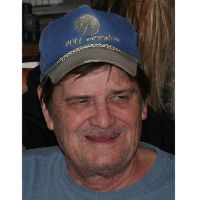 Jerry B. Lackman, 65, of Sheridan, passed away on Tuesday, March 24, 2015, at the Sheridan Memorial Hospital.Born June 21, 1949 to Helen (Aksamit) and Alex Lackman. He grew up in Sheridan, attending local schools and Sheridan College. He was a Vietnam Veteran. His earliest job was working at the Acme Power Plant. With his brother, Bob, they owned and operated a house painting business for many years. He also worked as a bartender, meat cutter, and at various coal and gold mines in Arizona, Montana, and Nevada. He had a great passion for fishing, hunting and camping. He knew all the back roads and every nook and cranny in the Big Horn Mountains. Jerry was a very good cook/baker and enjoyed sharing his traditional German and Polish dishes with friends and family. He liked to play cards and video poker but most of all he was happiest when he could be visiting and reminiscing with friends over a cold beer.Jerry\'s parents and brother preceded him in death. He is survived by aunts: Elsie Desefano and Phyllis Legoski and numerous cousins.Donations may be made in Jerry\'s name to the Sheridan Dog and Cat Shelter at 84 East Ridge Road, Sheridan, WY 82801, or to the VOA Homeless Shelter at 1876 S. Sheridan Ave., Sheridan, WY 82801.\"Wish a Ford & Chevy could still last ten years like they should. Is the best of the free life behind us now, Are the good times really over for good?\" - Merle HaggardKane Funeral Home has been entrusted with arrangements.