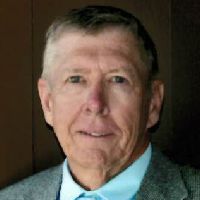 Jerry Browne passed peacefully at home on June 16, 2016, at the age of 69. He is survived by his wife of 45 years, Sharon, and his son, Todd (Tomomi). He is also survived by his mother Wilma, brother Rick (Sandy) , and nieces and nephews. He is preceded in death by his son, Jay, father Bruce W., brother, Bruce E., sister-in-law Marie, and his grandparents.He was born in Indianapolis, Indiana and moved to Sheridan with his family at the age of 6. Jerry graduated from Sheridan High School in 1965. He enlisted into the U.S. Navy in 1966. He served his country honorably on board the USS New DD818 as a radioman, 2nd class petty officer and was honorably discharged in 1970. For over 40 years Jerry was employed at Sheridan Tent & Awning. He took special pride in custom designing of boat covers, awning and special requests.Jerry was a life-time member of the BPO Elks #520 and a member of The First Presbyterian Church. Jerry was an avid bowler and well known throughout Wyoming and Montana due to his participation in various bowling tournaments. As part of this great joy of his life he attended National Bowling Tournaments for 30 years. He has to his credit two 300 games, an 800 series and multiple 299 games culminating in his induction to the Wyoming Bowlers Hall of Fame in 2014.Jerry dearly loved “his” Big Horn Mountains and most weekends in the summer could be found camping, fishing, and trail riding in his Wildcat ATV with various buddies. During retirement he and his wife became snowbirds and enjoyed being members of the “Monkey Brigade” ATV club in Quartzside, AZ. Memorial services with Military Honors will be held at 10:00 A.M. on Friday, June 24, at the First Presbyterian Church of Sheridan, 2121 Colonial Drive. Inurnment shall be in the Columbarium at the church. Refreshments will be provided in the church\'s Fellowship Hall.Memorials donations can be made in lieu of flowers to First Presbyterian Church or to Hospice of the Big Horns, P.O. Box 391, Sheridan, WY 82801 in Jerry\'s name.   Kane Funeral Home has been entrusted with arrangements.