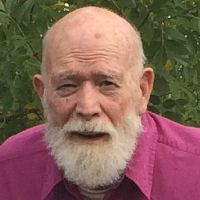 Jesse McRoberts was born November 10, 1927 in South Gate, CA. He met Evelyn Flint at the college pool and fell in love with the woman of his dreams. They were married on January 3, 1949 and celebrated their 68th wedding anniversary together. Jesse served in World War II, lived in the Golden era of the 50\'s in Los Angeles, and in Compton, CA through the 80\'s. He and Evelyn traveled round the world throughout their life. Jesse was, charismatic, outgoing and always had a story to tell, lived his life to the fullest and was always looking for the adventure that would be the most exciting to add to his story lines. He was an inspiration on how to make the most of everything, take life in your hands and accomplish anything you want. Jesse was an entrepreneur, a jack of all trades, welcomed everybody and especially if he could get you to sit and listen to his stories. Just to listen to him recite his stories was a treat. Jesse is survived by his wife Evelyn McRoberts, daughters Laurie (Gary) McRoberts Fiesel, Diana (Glen) McRoberts Wright, son Bryan McRoberts, a number of grandchildren and great-grandchildren. Jesse left us physically and departed to heaven but his spirit, legacy, wisdom, knowledge, wit, laughter and many other traits he had will forever be with us!!! He will be missed!No Services will be held.Kane Funeral Home has been entrusted with arrangements.