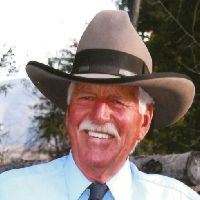 Another cowboy has left for the last roundup.Jim Niner still had plenty of irons in the fire this spring when interrupted by pancreatic cancer. He passed away June 26 under hospice and family care at home.Jim was born July 8, 1935, in Colorado Springs, Colorado, to Glen and Elizabeth (Schrader) Niner. He grew up around Bernalillo, New Mexico, amongst the Rio Grande Valley cottonwoods and southwestern mountain pines. Upon college graduation from New Mexico A & M in 1958, he loaded all he owned in his old Ford and came north to realize his dreams of a life outdoors on a horse.Jim married Barbara Shreve at Wolf, Wyoming, on September 26, 1960, and they spent the next 54 years in the area cowboying, ranching, and they raised their two sons, Clifford and Curtis.Jim was a husband, a dad, and a friend to many. He was a top hand, and his work was important to him. He was a picker and a grinner, and he sure could croon. He was a manager, a mentor, and an ambassador. He liked to read and discover. Jim especially loved the mountains and music.Jim was preceded in death by his parents, brothers Walt and Paul, and brothers-in-law John Wenk and Dale Shreve. He is survived by his wife Barbara, his sons Clifford (Gin Scott) and Curtis (Cathy), a brother Frank (Doris), a sister Grace Wenk, two grandsons, four great-grandchildren, and several nieces and nephews.In honor of Jim’s wishes no funeral is planned, but a gathering in celebration of his life will be held at a later date.Gifts in memory of Jim can be made to Hospice of the Big Horns, P.O. Box 391, Sheridan, Wyoming, or to Sheridan Senior Center, 211 Smith Street, Sheridan, Wyoming or to Big Horn Woman’s Club, P.O. Box 141, Big Horn, Wyoming.Kane Funeral Home has been entrusted with arrangements.