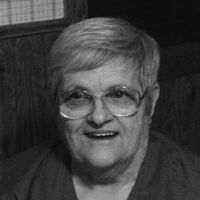 Long time Sheridan resident Joan Frances Kirby passed away quickly and unexpectedly at home on Tuesday, June 4, 2013. Valiant efforts by first responders and ER staff were futile but very much appreciated. Joan was born on September 4, 1937 in Millwaukee, Wisconsin to Owen and Johanna (Zapka) McIntire. Childhood sweethearts, Joan and Wayne Kirby were married on April 9, 1955 in Zion, Illinois. Joan was a lover and savior of animals from dogs and cats to horses and deer. Joan was also an avid baseball fan with her loyalties divided between the Colorado Rockies and the Chicago Cubs. Spending most of her time as a devoted wife and mother, Joan enjoyed cooking and made certain no one ever left the table hungry. Joan is survived by her husband and soul mate, Wayne; 2 daughters, Deborah (Mark) Hutchins of Sheridan and Colleen (Dean) Schatz of Gillette; 5 grandchildren, Loren (Sunya) Hutchins, Derek Hutchins, Tiffany Schatz, Lacy Schatz and Dakotah Schatz plus great grandson, Zaiden Schatz. In lieu of donations please make a special effort to spend time with your families and loved ones.At Joan\'s request no service will be held. Many thanks to all our friends for their condolences.Kane Funeral Home has been entrusted with arrangements.