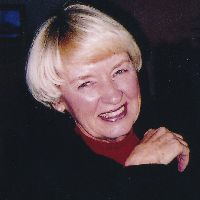 ‍Joanne Lillian Holbrook passed away at her home November 30, 2017. She was 76 years old.She was born in Havre, MT on October 14, 1941 to Ole M. and Lillian F. Hoveland. Joanne attended schools in Havre and Miles City, MT before her family moved to Sheridan her senior year, where she graduated from Sheridan High School.On August 17, 1968 she married Franklin Dwain “Doc” Holbrook and together they raised two sons. For many years she helped Doc in his chiropractic practice, as well as performing her loving duties of wife and mother. They lived together in Casper, WY for many years before retiring to Sheridan, WY.Joanne loved the Lord and served him daily. Her greatest love was to guide young children in the teachings of her Lord and Savior. She dedicated many hours to the church in Casper and in Sheridan, bringing many to peace and prayer. She was loved by many who considered her a mother, grandmother, great grandmother, Auntie Jo Jo, godmother and, of course, a great friend. So many were blessed by her warmth and affectionShe is survived by her sons Gus (Nanette) and John (Kristine); five grandsons, Jared, Joel, Kristopher, Kellan and Kameron; five great grand children and her sisters, Karen (Frank) Kawulok and Marci (Pat) Kirk, sister in law, Carole Hoveland and numerous nieces and nephews.She was preceded in death by her loving husband, her parents and brother, Jack Hoveland.A Celebration of Life will be 2 PM, Saturday, December 9, 2017 at Bethesda Worship Center with Pastor Scott Lee officiating. A reception will be at the church after the service. IIn lieu of flowers, donations may be made to Bethesda Worship Center at 5135 Coffeen Ave. Sheridan,WY 82801, or a charity of your choice.Kane Funeral Home has been entrusted with arrangements.