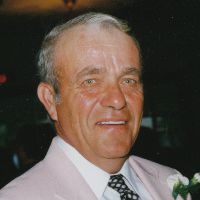 View Service Folder | Click for Video Tribute The Pilch family and friends have lost a very good man. Joe A. Pilch passed away on October 23, 2014 in Billings, MT. Joe was born September 22, 1939 to Joseph and Anna Pilch. He was raised on the ranch and attended a country school as a young boy and graduated from Sheridan High School in 1958. He earned a Bachelors in Agricultural Science from the University of Wyoming in 1962. As a boy he loved his 4-H steers and leather craft. He would always have a good old reckless tale to tell of his younger years on Lower Prairie Dog Road. During his Junior year in college he was drafted to the Army and was sent to Germany for several years to serve his country. Later he returned to finish college and that\'s when he met his true love Sandy Robinson. Barely a year later the two were married on December 12, 1964. Joe and Sandy moved back to Sheridan where they warmed their home with two children-- Marci and Jeff. Joe worked several jobs to provide for his young family. He was even a shoe salesman and a milk deliveryman for Jersey Creamery. They moved to Riverton, WY in the Fall of 1970 where Joe worked for the Farmer\'s Home Administration for four years. Joe\'s life--and his family\'s life--changed forever the day his Dad traveled across the mountain to ask him to return to Sheridan to live on the Ross place and help with the Pilch Ranch. Joe didn\'t even think twice about loading his young family in a U-Haul to head back to Sheridan to their new home on the ranch. For 30 years he lived the life of a Wyoming rancher and farmer, plowing fields, haying, and packing baby calves to the porch of the ranch house to keep them warm. He worked long, hard days and nights, yet was still able to be a wonderful caring and loving man to his wife and children. In 2003 he and Sandy moved to town and bought a home to fix up and turned it into their dream retirement home. There they became golfers and bought a home in Gold Canyon, AZ where they enjoyed golfing in the desert. Over the past 10 years Joe and Sandy traveled to Europe, Australia, Alaska and Hawaii. During that time he was honored to become a Papa to his only grandchild Haley, who made him very proud. Joe was a life member of the Elks and a little league baseball coach for several years. He was an avid Wyoming Cowboy football fan and served on several Boards in Sheridan County. He will be dearly missed by friends and family.Joe was preceded in death by his parents. His survivors include his wife Sandy, son Jeff and wife Deirdre of Windsor, CO, daughter Marci and husband Arland Timm and granddaughter Haley of Sheridan, and his brother Ed Pilch and wife Margaret and sister Marilyn Wolter.Services will be held at 10:00 a.m. on Saturday, November 1, 2014, at St. Peter\'s Episcopal Church with Fr. John Inserra officiating. Interment will follow in the Sheridan Elks Memorial Cemetery with Military Honors.In lieu of flowers, the family has requested donations be made to Sheridan County 4-H at 3401 Coffeen Avenue Sheridan, WY 82801.Kane Funeral Home has been entrusted with arrangements.