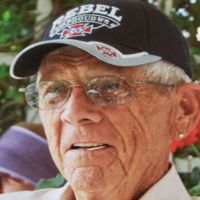 Joe McNeil Wetherington (October 20, 1932 – June 24, 2018) Joe McNeil Wetherington, the only son of Johnnie and Delilah (Stewart) Wetherington was born October 20, 1932 in New Bern of Craven County North Carolina. Joe was a husband, father, an American military veteran of the Korean and Vietnam Wars, a diesel and aircraft mechanic, truck driver, and a man of God who taught others the true value of living life. When he wasn’t applying his God-given purpose to the aforementioned responsibilities, he engaged in a plethora of activities, such as hunting, snow and water skiing, boating and fishing, recreational shooting and ammo reloading, motorcycle riding, car racing, color pencil art and woodcarving. He lent himself to voluntary service as a board member in his local church for a number of years, as well. A resident of Sheridan, Wyoming of over 40 years, he lived in or traveled to places as Harlingen, Texas, F.E. Warren AFB, Wyoming, McChord AFB, Washington, Malmstrom AFB, Great Falls, Belt, and Billings, Montana, Phoenix, Arizona, the Azores, the islands of Guam and Japan, the then West Germany, where he visited nearly all the countries of Western and Southern Europe, Newfoundland, Canada and Libya, Africa. As a teenager, he worked a summer on the famed King Ranch, the largest ranch in Texas. He was one of the Kingsman, as labors were known on this ranch. He traveled through or visit most of the states of the US, including Hawaii (as a US territory & a later a state), and Alaska. Let it not fail mention of his marriage of over 63 years to his darling wife, Janice, who he met in Missoula, Montana and wed in Wallace, Idaho, and for us, his family, we regard these two trips as the most special and important trips of all which he made during his life. It may come to you as no surprise that Joe never knew a stranger and was a friend to all who would offer him the least little opportunity to do so. We never knew him to turn down a chance to aid or assist a fellow human in need. He was a living tribute to his Wetherington-Stewart families, especially with his so very one of a kind sense of humor. Without question, Joe was a truck driver’s truck driver, having learned to drive from his father along the US East coast while he was just twelve years old. It is beyond us to offer you a number of miles which he drove in his lifetime, save to mention that an estimate is well into the hundreds of thousands of miles, for that’s how much he so loved to drive, whether it was a car, motorcycle, race car, four-wheeler or an 18-wheeler. A modest model airman, Joe served his country as an enlisted member of the US Air Force for 20 years, 6 months and nineteen days, where he was honorably retired on July 1st 1971. Joe and Janice raised four children; Joe M. “Neil” Wetherington, Jr., Kelley Lynn Meyers, Charles Edward Wetherington, and Rebecca Dawn “Becky” Wetherington. They have 13 grandchildren and 14 great-grandchildren. Joe passed quietly at his home on Sunday, June 24th, 2018 surrounded by family who loved and adored him so. He is survived by his wife Janice, two sisters; Joann Rapp & Katherine Radford, children & children-in-law; Neil & Lori, Rob & Kelley, Charlie & Belinda, David & Becky; grandchildren; Mary, Michael, Joseph, Jacob, Christopher, Daniel, Katie, Dani, Sam, Mykaela, Elijah, Mallory, & Matthew-Wyatt, and great-grandchildren; Deja, Ashley, Ephrum, Victoria, Elizabeth, Isabella, Lily, Kathryn, Saylem, Casen, Kailum, Micah, Emery, and Stella. In memory of Joe, and in lieu of flowers, please consider donating to the First United Methodist Building Fund, 215 W. Works St., Sheridan, WY 82801 or the Sheridan Dog and Cat Shelter, 84 East Ridge Rd., Sheridan, WY 82801. A Celebration of Life with Military Honors will be held at 11:00 am on Monday, July 2, 2018, at the First United Methodist Church with Pastor Jim Barth officiating. A reception will follow at the church. Inurnment will be held at a later date.Kane Funeral Home has been entrusted with arrangements.Kane Funeral Home has been entrusted with arrangements.