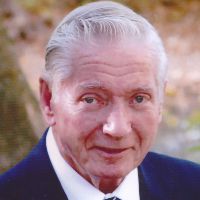 Joel Warren Deeble, 90, of Sheridan, passed away on Monday, October 16, 2017, at the Sheridan VA Mountain View Living Center.Joel was born on October 25, 1926 to parents Joel W. and Edna Mae (Scoggins) Deeble in Lead, S.D.  He was the third child of four and the only son. He loved growing up in Lead, hiking and picking berries in the Black Hills .He loved music. As a young child he learned to play the accordion which he continued through out his life. Continuing with music, Joel was a drummer in the High School band.  He also participated in various sports.  Joel was anxious to join the war effort.  He completed his requirements for graduation early and enlisted in the Navy in 1944,  with his dad receiving his High School Diploma for him at graduation from Lead High School.  He served as a radio operator during the War and was stationed on Admiral Barby\'s Amphibious Force Flag ship.  His duties included participating on beach landings to establish ship to shore communications during battles. When the war ended he returned to Lead where he met and married JoAnn Wilkins.  Together they raised six children.  Joel worked as miner at the Home Stake Gold Mine in Lead. He studied with LaSalle Institute earning his degree in Accounting.  Not wanting his son to work in the Mine, Joel moved his family, eventually settling in Southern California where he was the CEO for San Bernardino Community Hospital.He was a member of the Church of Jesus Christ of Latter-Day Saints where he served in many capacities including Branch President, President of the Sunday School, Executive Secretary and Primary Teacher.  He enjoyed camping, golfing, bowling and walking in the Black Hills. Joel was preceded in death by his parents, wife JoAnn, grand daughter Mekenna, daughter in law Lynda, three sisters, Hilda, Mary, Dora, and two great grandchildren. He is survived by his children, Robert (Keyana) Deeble of Eagle, ID, Mary Jane (Jim) Stival of Bentonville, AR, Elizabeth Ann (Rick) David, Downey, ID, Alyce Sue (John) Goodell of Sheridan, WY, Bonnie Jo (Brad) Rowe of N. Las Vegas, NV, JoAnn (Robert) Robbins of Torrington, WY, thirty grandchildren and numerous great grandchildren and two great, great grandchildren..A Visitation will be at 9:00 am on Monday, October 23, 2017 at the Church of Jesus Christ of Latter-Day Saints with Services at 10:00. Interment will follow in the Sturgis Black Hills National Cemetery at 3:00 pm with Military Honors.  Memorials to honor Joel can be made to the Sheridan Senior Center Daybreak Program at 211 Smith St., Sheridan, WY 82801 or to the Disabled American Veterans, P.O., Box 14301, Cincinnati, OH 45250-03001.Kane Funeral Home has been entrusted with arrangements.