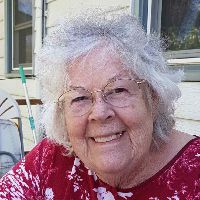 Johanna died peacefully in her son’s arms on January 20, from pancreatic cancer. She was 79. Born in Sheridan, she graduated from Sheridan HS and attended the Univ of AZ. She married Ted Gostas, a career army officer, and lived in the US and overseas to support his missions.When Ted went to Vietnam and was captured, Johanna remained in Sheridan to raise their 3 children. “I remember when Ted came up missing. The dreaded military guy came to our door to tell me he was MIA” said Johanna, “I couldn’t just sit there and do nothing!” She became politically active with “Waiting Wives” and “National League of Families of Prisoners and Missing in Southeast Asia” and was a representative to the Conference on the Treatment of Prisoners of War in Geneva, Switzerland. She organized letter writing, petition signing, and phone calling campaigns, sit-ins and parade floats, and distributed the POW MIA bracelets for “Voices in Vital America” endlessly reminding America, “Don’t Let them Be Forgotten!” She participated in the 1973 parade for Miss America, Terry Meeuwsen who wore Ted’s bracelet during the pageant. She attended the Paris Peace Talks. For her efforts, Johanna was nominated for “Wyoming Citizen of the Century” as part of Wyoming’s millennium celebration.Johanna taught art at the WY Girls School and the Senior Center, and was an Avon Lady. She was a prolific crafter and a member of the Sheridan Art Guild.She suffered a stroke at age 40 and not long afterwards, her youngest son died in a car accident. Johanna was so impressed with how alternative healing methods helped heal her trauma that she became a massage therapist herself. For over 30 years, she helped countless people with her healing touch and was a leader in the American Massage Therapy Association.Johanna was most proud of her children and grandchildren, becoming a healer and mentor, creating a support system of inspiring friends, and she lives on, fostering other’s dreams, with donations of hundreds of books and art supplies to teachers and institutions. She is preceded in death by her parents, siblings and son, Jason Gostas. She is survived by her son, Demetrius Gostas, his wife, Linda and his sons, Demetre, Darien, and Daine Gostas and by her daughter, Laura Stamp, husband, Dirk and sons, Jason and Jean-Luc Stamp. Johanna requested there be no service. A celebration of her life will be organized when flowers return to the mountains.“Please teach your children that we ALL walked out of Africa.” -Johanna GostasNo flowers or gifts. Please make donations to Second Chance Cat Rescue.