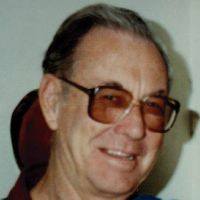 John D. Jackson, 90, of Lewistown, MT, passed away on Monday, December 14, 2015 at his son\'s residence in Sheridan, WY. He was born on December 19, 1924, in Christina, MT, to parents John Wesley and Martha (Brooks) Jackson.He married Lillie Gertrude Dodd on August 31, 1949. They were married for almost 64 years and dad was never the same after Lillie (Toots) past away in 2013.John served in the US Army from 1943 to 1946 during World War II in the Pacific Ocean Theater. He worked for the brick yard in Lewistown, an extra job as a taxi driver, and the United States Post Office as a letter carrier. You could always tell when he was delivering your mail in the early days as he had a group of dogs following him. John loved dogs, to him they were man\'s best friend. He retired after 30 years of service.John enjoyed hunting, trapping, fishing, camping, family time, card games, Holiday dinners, reading, walking, bowling, music, dancing and the library. John felt music heals the soul. His children remember waking up to their dad playing his banjo on the weekends. He also helped his wife, who volunteered at the food pantry, by delivering donated items to the Food Pantry in Lewistown, MT. John was a member of the VFW, the Moose Lodge, the American Legion,the Eagles Lodge and attended the Methodist Church in Lewistown, MT.John was preceded in death by his parents, his wife, three brothers and two sisters. He is survived by his children: John “Nick” (Janice) Jackson Jr., of Sheridan, WY, Brenda (Bernard) Bosch of Libby, MT, and Vera (Jeff) Yetter of Sandpoint, ID, grandchildren: Linda (Steve) Horsley, Nicole (David) Maxey, Ellen (John) Menaker, John III (Jessica) Jackson, Joshua (Taea) Jackson, Roger (Susie) Bosch, Brian Bosch, Matthew (Moriah) Yetter, Angela (John) Wheat, Timothy (Carla) Yetter and 20 great grandchildren.“Dad went home to be with Jesus, he is now in heaven.” Love and miss you Dad.Services will be held at a later date.Kane Funeral Home has been entrusted with local arrangements.