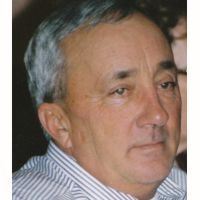 John Koltiska, 69, of Sheridan, passed away on Sunday, July 14, 2013 at his home with his family by his side, after a year long battle of Cancer.John was born to Paul and Glessie (Bolling) Koltiska on May 2, 1944 in Sheridan, WY. John was raised in Sheridan and graduated from Sheridan High School in 1962. He then attended Sheridan College. He then went on to train at the Harvey Factory in Illinois, where he becamea certified diesel mechanic.John then went on to join the Wyoming National Guard and served for seven years. During this time he also co-owned KB Tractor Company with his family. Later John and his family created the AC Ranch in Sheridan County.On January 24, 1967 John married the love of his life Robyn (Conner) Koltiska. Later, they lived in the home John built on the AC Ranch. Together they developed a beautiful life of ranching and providing for their three children, John, Jim and Becky.John was known for his witty, quick sense of humor, knowledge of machinery, and his love of ranching. Later in life he found tremendous joy in his eleven grandchildren; Kya (Jeremy), Casey, Zach, Ashton, Kade, Luke, Katie, Madison, Hailey and Cale. And his great grandchildren, Tate and Kaitlyn Ohmstede. John also enjoyed playing darts weekly and going to State Dart Tournament in Casper every year.John was president of Prairie Dog Water Supply Company and the Kearny Lake and Land. John was also a member of the Elks, Legion, and National Darts Association. As well as a life long member of Holy Name Church.John was preceded in death by his parents, brother Paul G., infant sister Lisa Beth. He is survived by his wife, Robyn, sister Barbara (Jack) Norris, brother Tom (Carol)Koltiska, brother Dan (Sue) Koltiska, sister Cindy (Jim) Reindahl all of Sheridan. As well as his sister Judy O\'Neil of South Dakota, his children, John (Michelle) Koltiska, Jim (Rochelle) Koltiska and Becky (Chad) Bradford, his eleven grandchildren, two great grandchildren, numerous cousins, nieces, nephews and friends.A Visitation for John will be held at 6:00 p.m. on Thursday, July 18, 2013 with the Rosary at 7:00 p.m. at Kane Funeral Home with Father Louis Shea officiating. A Mass of the Christian Burial will be held at 10:00 a.m. on Friday, July 19, 2013 at Holy Name Catholic Church with Father Jim Heiser and Father Louis Shea officiating. Burial with full Military Honors will be in the Elks Memorial Cemetery with Father Jim Heiser and Father Louis Shea officiating. A Reception will follow at the Elks Lodge.Kane Funeral Home has been entrusted with arrangements.