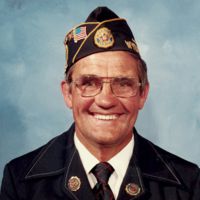 John Ross Strong, 90, passed away peacefully at the Mountain View Living Center in the Sheridan VA on Saturday, July 27, 2013 after a short battle with cancer.Born on July 10, 1923, John was the youngest of 10 children born to William and Arnetta (Hill) Strong in Texanna, OK. He received his diploma in 1938. In April 1943, John answered his country’s call to arms by joining the Navy and serving in the Pacific during the war. After returning from overseas he went back home and married Cora Jane Hefner on February 15, 1945. They moved from Oklahoma to California and then on to Wyoming. They were blessed with two daughters, Linda and Carol “Jeanne”. The family leased land and tried their hand at raising cattle and sheep until the market bottomed out. John later married Phyllis Hillhouse in January 1974, whom he met while they both worked at the Worland Water Department. He worked as a ranch hand and mechanic, then later with the Worland water department as a meter reader, as well as “riding ditch,” checking on irrigation gates. John was active in the VFW, American Legion, including for a time as Department Sergeant at Arms, Elks, Eagles, and the Lions Club. John had an infectious smile and laugh to go along with his stories of times gone by.John is survived by granddaughter Shellee Billings of Olympia, WA, grandson Brian Billings (Jennifer), and great-grandchildren Tyler and Avery of Rochester, WA, and son-in-law Jon Karlin, survived by John’s daughter, Linda. He is also survived by Richard (Connie) Hillhouse as well as numerous grandchildren and great-grandchildren from his marriage to Phyllis. He is preceded in death by his daughters Carol “Jeanne” and Linda, stepsons Randy and Rube, wives Cora Jane and Phyllis, as well as his parents and all of his siblings.Graveside Services for John will be held at 11:00 a.m. on Saturday, August 17, 2013 at the Mountain View Cemetery in Basin, WY with Military Honors.Kane Funeral Home has been entrusted with arrangements.