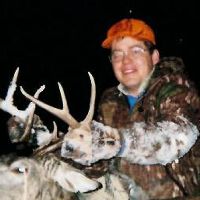 Jonathon was born on September 13, 1984 to parents Thomas and Pamela (Bird) Atkinson  in Sheridan, WY.  He passed away peacefully at the Sheridan Memorial Hospital on Sunday, September 17, 2017, with his family by his side. He was a true fighter from day one to the end. Jonathon grew up in Sheridan and loved life, anyone and everyone was his friend. He graduated from Sheridan High School in 2003, Sheridan College in 2005, and enjoyed a year at  UW with his older brother, Christopher before his illness took over leaving him deaf and blind. Jonathon loved working out at the YMCA, driving, music, reading and especially hunting and fishing. In 2002, he shot a Boone and Crockett bear in the Big Horns, as well as numerous deer and elk. He did not let his illness slow him down, he continued to hunt with the help from Jim, Gary, Joe, Frank, Jack, Timmy and his dad, never letting anything slow him down regardless the inconveniences life threw at him.  He was a member of St. Peter\'s Episcopal Church.  Jonathon is survived by his parents Tom and Pam Atkinson, brother Christopher (Brenda) Atkinson, grandmother Lois Hall, Aunts Stephanie Kendrick, Tina (Anthony) Mediate, nephew, Owen, niece, Nora, cousins Jake (Nicki)  Kendrick, Sam (Hannah) Kendrick, Phillip (Sammy) Mediate, Daniel (Beth) Mediate, as well as numerous great aunts and uncles.  He is preceded in death by his Grandparents  Akie and Josie Atkinson, and Hugh Bird.  We have lost a true hero.Memorials to honor Jonathon can be made to the Sheridan County YMCA, Youth Weight Lifting Program,  417 North Jefferson, Sheridan, WY 82801 or to St. Peter\'s Episcopal Church, 1 S. Tschirgi St., Sheridan, WY 82801.A Memorial Service will be at  10:00 on Thursday, September 21, 2017, at St. Peter\'s Episcopal Church with Father John Inserra officiating.  A reception to follow immediately in the fellowship hall. A private inurnment will be held. Kane Funeral Home has been entrusted with arrangements.