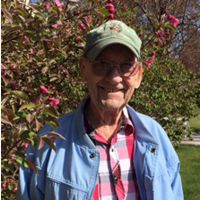 Joseph Lawrence Dombovy, 86 years old, died at Pioneer Manor in Gillette, WY on June 4, 2016. Joe was born June 24, 1929, in Little Falls, MN, to Lawrence and Lucille Tuzinski Dombovy. He was the youngest of 4 children. At 17, Joe enlisted in the Navy. After returning home at 19 years of age he hired out on the Northern Pacific Railroad and worked his way up to engineer. In 1952, he married the love of his life Margaret “Peggy” Pharmer. They were married 59 years when Peg passed away in 2011. In 1973, the family moved to Sheridan, WY. Joe and Peg loved living in Sheridan and never regretted their move. They made many lifelong friends in their 43 years there. Joe retired in 1991, after 43 years with the railroad. He was proud of his job and was well respected by his coworkers. Joe loved fishing and hunting and enjoyed these hobbies in his retirement. Joe was a lifetime member of the Elks. Joe moved to Gillette to live with his daughter Jodi and her family in October of 2014. Joe was preceded in death by his parents, 3 sisters, an infant brother, wife Peggy and son Timothy. He is survived by his children Rick Dombovy of Gulf Shores, AL and Devil’s Lake, ND, Terry Dombovy of St Paul, MN Jodi Wiley of Gillette, WY, Christina Stringer of Las Vegas, NV, and Daniel Dombovy of Las Vegas, NV. He is also survived by 13 grandchildren, 14 great grandchildren, brother’s in law, sister’s in law and many, many nieces and nephews that adored their Uncle Butch.A Celebration of Life gathering will be held at 2:00 p.m. on Thursday, June 16, 2016, at the Kane Reception Hall.Memorials to honor Joe may be made to the Sheridan Senior Center at 211 Smith St., Sheridan, WY 82801.Kane Funeral Home has been entrusted with arrangements.