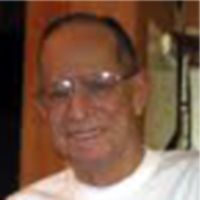 Joseph Phillip Garriffa, 70, passed away peacefully at home surrounded by his family on August 9, 2013.Joe was born on December 18, 1942 in Sheridan, WY to Carl Garriffa and Opal (Roberts) Garriffa. He attended Holy Name School and graduated from Sheridan High School in 1960. Throughout high school Joe worked at Jensen’s Upholstery Shop and continued to do so after graduating. Following his work at the upholstery shop, he worked at Artic Locker and became the manager until he started his railroad career with C B & Q Railroad on July 26, 1968. Joe continued his railroad career for thirty six years and retired in 2004.Joe was a member of Holy Name Catholic Church. He was also a member of Eagles Aerie # 186 for 42 years and a member of the United Transportation Union for 45 years. Joe thoroughly loved spending time with his family and also enjoyed camping, wood-working , playing the Base Guitar, the Accordian and carpentry. He had numerous friends and also enjoyed spending time with them as well. Joe helped with many home improvement projects for family and friends. He was truly a “Jack Of All Trades”. He was a railroad memorabilia collector and a huge animal lover.Joe married Billie Griffin in 1960 and together they had two daughters. They later divorced in 1983. After divorcing Billie, Joe engaged in two other marriages, one to Louise Nash and one to Selma Hofmeister.Joe was preceded in death by his parents and wives Louise and Selma (“Jean”). He is survived by his daughters, Connie Williams (Joey), Sheridan, WY, Carol Garriffa and Lonni Miech, Sheridan, WY, brothers Clint Roberts (Beverly), Pierre, South Dakota, Jack Schlothauer (Nadine), Goleta, California, granddaughters Nicole Wamsley (Adam), Soda Springs, ID and Heather Williams and her fiancé Brian Hampton, Sheridan, WY. Joe also had numerous step-children and step grand-children from his marriages to Louise Nash and Selma Hofmeister. He is also survived by numerous nieces and nephews.Funeral service for Joe will be held at 10:00 a.m. on Wednesday, August 14, 2013 at Kane Funeral Home in Sheridan, WY with Father Ron Stolcis officiating. A brunch reception will follow in Kane Reception Hall.Memorials to honor Joe may be made to The Sheridan Dog and Cat Shelter at 84 East Ridge Road, Sheridan, WY 82801.Kane Funeral Home has been entrusted with arrangements.