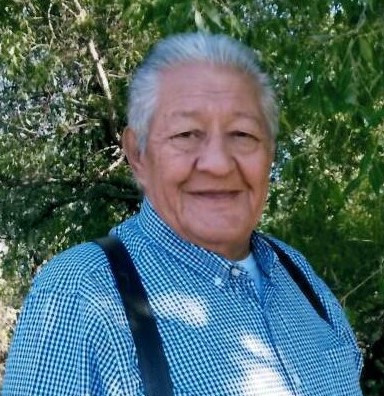 ‍Joseph Thomas “Joe” LaForge, 76, “crossed the slippery log” on Sunday, August 12, 2018, in Sheridan, WY. He was born July 4, 1942, to Joseph T. and Carolyn (Kipp) LaForge. He was a proud member of the Crow Tribe a member of the “Ties the Bundle Clan” and a child of “Greasy Mouth” Clan, a descendant of Enemy Hunter and Sun Goes Slow Family. Joe was the oldest surviving LaForge. He served in the US Army MAC-S06 Special Operations Group; serving three tours in Vietnam.Joe was a traditional Crow Dancer. For 30 years he shared his dancing skills, Crow Tribal History and culture skills with the Sheridan, WY community.For 20 plus years Joe worked for School District #2 as a Janitor. At Meadowlark School he was referred to as “Janitor Joe.” He was also an avid bowler for many years and coached youth bowlers and adults at Cloud Peak Lanes.Joe\'s own family is; his wife, Rita, Joseph “Ondag”, NeNe, Clete, Cloyce, Kevin, Crystal and Ellen LaForge, and adopted Chase Family. He is also survived by Shirley and Samuel TakesHorse and the Hanes Family.Joe had Diabetes and as disease and illness progressed he reconnected with his brother, Dean and sisters, Ramona and Alberta. He is also survived by the Smith Family of Pryor, MT, Ricky and family, Bernadette, Burton, Miriam and John Horning, Dr. Mariah White and family, his uncle, John Emery of Billings, MT, aunts, Jackie Emery of Billings and Joanne Mitchelle of MT.Joe really appreciated daily teasing phone calls from son Ondag and special close friends “Diaz-Diaz”, Mark, Carl, Kent, Paula and Dan.The family of Cloud Peak Bowlers can not be thanked enough for their support and concern.The Service will be held at Kane Funeral Home on Friday, August 17, 2018 at 6:00 pm with Military Honors. A reception to follow at Kane Reception Hall.Kane Funeral Home has been entrusted with arrangements.