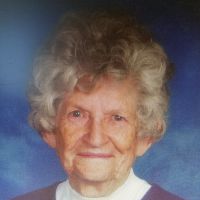 Josephine (Josie) Schreibeis, age 92, lifelong Sheridan area resident passed away March 17, 2018 in her home after her battle with pancreatic cancer, surrounded by the family she loved. Josie was born in the family home on 5th Street in Sheridan to Clara (Patton) Blevins and Clefton Blevins and joined her older sister Lucille on July 24th, 1925. The family moved to Decker, MT, when she was 2 years old and homesteaded on the Tongue River on the Wyoming/Montana border. She attended the one-room Squirrel Creek School through the eighth grade and graduated from Sheridan High School in 1945. She married Lloyd Schreibeis on March 3, 1944. After Lloyd returned from WWII military service he became a partner in his family’s ranch. In 1959 Lloyd and Josie purchased their dairy ranch on Prairie Dog Creek where they resided until 1965 when they moved into Sheridan. They belonged to Jeans and Queens Square Dance Club and Polka Club and traveled to dances and they were also members of the Antique Car club. Her passion for genealogy and Sheridan area history prompted her interest in the Sheridan Historical Society. As long time member of the African Violet Club she raised many African violets and participated in the annual violet show and sale. She delighted in her dolls and was a member of Doll Club. Growing up she was a member of 4H and later became a 4H leader for her children and grandchildren. She was an avid cook and baker. Hobbies included crocheting, quilting, scrapbooking, gardening and of course her life-long love of photography. Lloyd and Josie enjoyed traveling and accomplished their dream of visiting all 50 states. Lloyd and Josie enjoyed staying in the Big Horns, where they could fish and relax and she could photograph wildlife and scenery. She seldom missed her soap-operas, game shows, and her weekly excursion to listen to bluegrass music at the Occidental in Buffalo. She loved attending drama, music and sporting events in which her children, grandchildren and great grandchildren participated. Spending time with family and friends was always a priority and was of utmost importance for her. Josie was an accomplished dairy ranch wife, prepping the barn for milking, mowing hay and delivering milk and potatoes to market were a few of her responsibilities. She worked in the VA hospital kitchen, Angionette’s doing alterations, and at Bruce’s Carpet Center. From 1971 until her retirement in 1988 she worked in the Assessor’s office at the Sheridan County Courthouse. In 1996 she came out of retirement to help operate and manage Treasured Stitches quilt shop until it closed in 2008. During that time she enjoyed quilting, helping quilters and sharing her expertise. Josie was preceded in death by her husband Lloyd in 2008 and her son Melvin (13) in 1962. Siblings that proceeded her in death were three half-sisters - Jessie (Samuel) McCall, Irene (Frank) Povey, and Virginia (Jim) Brosius, two sisters - Lucile (Gene) Shreve and June (Milo) Gilkison, and a brother Robert Blevins, a son-in-law Vince Kirol and great granddaughters - Anna Rowland and Erin Henry. She is survived by her four daughters - Norie (Ralph) Rowland, Rita Schreibeis, Nita (Aaron) Dockery all of Sheridan and Diane Kirol of Great Falls, grandchildren - Robin (Dave) DeBolt, Randy (Teri) Rowland, Rick Rowland, and Patrick Barker all of Sheridan, Rhonda (Wade) Holwell of Las Vegas, Troy Barker of Laramie, and Kip Kirol of Portland, great grandchildren - Trent (Aubrey), Zane, Rachael (Lance), Ian (fiancé Bri), Forrest, Mikkayla, Olivia, and Gavin, great great grandchildren - Amelia, Braeya, Whitley, and Lanae, half-sister Pat (John) Rudolph of Gillette, and brothers-in-law - Gene (Bonnie) Schreibeis of Worland and Norm (Cheryl) Schreibeis of Sheridan. In lieu of flowers please send memorials to 1) Immanuel Lutheran Church, 1300 W. 5th Street, Sheridan, WY 82801, 2) Dan Carlat-Occidental Jam Memorial Scholarship Fund, 637 Summit Drive, Buffalo, WY 82834, 3) Big Horn Mountain Polka Club, 71 Box Cross, Sheridan, WY 82801. A Visitation will be held at 9:00 with Services at 10:00 on Monday, March, 26, 2018, at the Immanuel Lutheran Church with Reverend Paul J Cain officiating. A Reception will follow the services at the church. Interment will be held in the Sheridan Municipal Cemetery.Kane Funeral Home has been entrusted with arrangements.