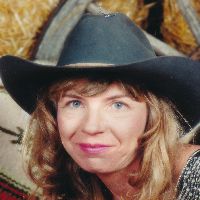 Joyce Ann Zingham McGregor, 59, of Sheridan, passed away at her residence. She was born in Sheridan, WY, on December 1, 1956, to parents Richard Gerald and Helen Clara (Pidde) Zingham. Joyce had an adventurous spirit and loved to travel. After graduating high school she lived in several states including Texas, Idaho, Alaska and Colorado. In Alaska, she married the father of her children and later moved to Pagosa Springs, CO where she raised her small children. It was there she started her own picture framing business called Picture Perfect Framing. After being away for many years she came back to Sheridan, WY to take care of her beloved elderly mother until she passed.Joyce had many interests and hobbies. She enjoyed beading, making jewelry, horses, collecting rocks and antiques. Joyce had a big heart and brought joy to the people around her.Joyce was preceded in death by her parents. She is survived by her daughters, Melissa McGregor of Carrollton, TX, Molly McGregor of Irving, TX, brothers Rick Zingham and Scott Zingham and her niece Jessica Kaminsky and nephew Justin Zingham and her great niece Jordyn Bason and great nephews Milo and Peter Kaminsky of Sheridan, WY. A Celebration of Life will be held at 2:00 on Friday, March 11, 2016, at Kane Funeral Home with Reverend Kevin Jones officiating.Memorials to honor Joyce may be made to CHAPS Equine Assisted Therapy at PMB 201 1590 Sugarland Dr., Ste, B, Sheridan, WY