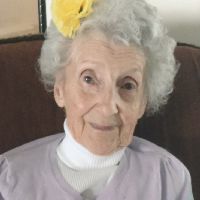 Katherine Barbara “Kay” Fradet, 100, of Sheridan passed away peacefully at her home on July 6, 2015, surrounded by those who loved her. On May 7, this year, Kay celebrated her 100th birthday with a well attended open house celebration at her home. She was so happy and had such a wonderful day!Kay was born on May 7, 1915, in Louisville, CO, to Sam and Catherine Cecelia (Dravecky) Banich. She always said “I was born the day the Lucitania sank!” She later moved with her parents to Acme, WY, for her father\'s work in the coal mines. Her sister, Josephine was born in 1920, and another sister, Margaret came along in 1029, shortly after the family moved to Sheridan.Kay graduated from Sheridan High School in 1932, and left shortly thereafter for Bremerton, WA, to work for Boeing Aircraft. While living there, she met and married Leroy V. Fradet at the St. James Cathedral in Seattle on May 25, 1942. On August 12, 1944, they welcomed their daughter Barbara Dianne, who they raised in Sheridan, WY.Kay began playing the piano as a very young child and never lost her love of the piano. She played nearly until the day she passed. She taught many local children the piano when she was only twelve years old! She continued to play piano throughout her life, as well as volunteering as a pianist at the VA and the Sheridan Senior Center. She was always willing to play for friends who visited and even played long distance on the phone to friends and family – including a dear friend in Ireland!Kay also loved art – as a spectator and also as a painter. She painted throughout her life.Kay, Leroy and daughter Barbara traveled the world. As a family, they went around the world twice! Deep sea fishing in Mazatlan and Rancho Buena Vista in Mexico was her passion.Kay worked as Deputy City Clerk and Treasurer in Sheridan and was the book keeper for her husband Leroy\'s business. Columbus Plumbing and Heating.Kay loved the outdoors and was happiest when in the woods, near a lake or stream. She loved fishing, but would NOT eat fish!She was a member of Holy Name Catholic Church of Sheridan and former member of Kleenburn Catholic Church in Monarch.Kay was preceded in death by her parents, Sam and Catherine Banish, her husband, Leroy, her sisters, Josephine Roberts and Margaret Stall as well as nephew Ethan Allen Roberts. She is survived by her daughter Barbara Foley, of Sheridan, her niece, JoLouise Michaels of Louisville, CO, and her niece Cathy Jackson and family of Paradise Valley, AZ, along with many nieces and nephews. She is also survived by her loving caregivers, Darlys, Edith, Linda, Fawn and Thelma and their families.Cremation has taken place,a Graveside Service will be held on Monday, July 20, 2015, at 10:00 in the Sheridan Municipal Cemetery.Memorials to honor Kay can be made to the Fulmer Public Library Wyoming Room, 335 W. Alger, Sheridan, WY, 82801.Kane Funeral Home has been entrusted with arrangements.