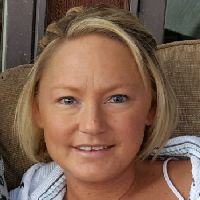 Kelsey Briana Chamberlain, 34, passed away at her residence on Tuesday, May 8, 2018, from complications of diabetes. Kelsey was born to Jane (Howe) Chamberlain and (the late) Byron Chamberlain on December 18, 1983 in Sheridan, WY. Kelsey attended Sheridan schools and graduated in 2002 from Sheridan High School. She attended the University of Wyoming and graduated with a degree in Speech/Language Pathology. She was accepted into the Masters Program at U of WY and was completing this when her father died. As a child, she was very active, loved her playmates, engaged in all kinds of sports (many coached by her dad) and excelled in many. Kelsey was such an animal lover that she was always bringing home turtles from the pond and even baby garter snakes. Other pets included an iguana, tortoise, fish and her beloved dog, Gracie. She leaves behind her 3 turtles, Kona, Kailua & Kauai. Kelsey’s artistic abilities were evident as a young girl and she grew to have her own style in clothes and decorating the various places she lived. She loved the colors bright yellow & red and usually had her home decorated with these colors. Her favorite flower was poppies, which she painted pictures of to decorate her walls. She sent cards to friends and family, many that were handmade, and receiving one of her poems was truly a special gift! Kelsey’s artistic flair was evident with her decadent desserts, especially her popular fruit pizzas. She was the decorating diva for many of our holidays, making the room and table look amazing. She was a reserved soul, but once she got to know you, then you would see her wittiness, bubbly personality and caring spirit. Even with her health struggles the last few years of her life, she was always positive and uplifting to others. Kelsey had just returned from celebrating her grandparents 65th wedding anniversary in Miles City. Kelsey had the time of her life with family and friends loving her and we feel this precious time together was a celebration of her life. Kelsey was preceded in death by her father, Byron; her brother, Beau; grandparents Dorothy & By Chamberlain and step-grandfather, Leonard Jennings. She is survived by her mother, Jane Chamberlain Jennings, her stepfather Steve Jennings of Sheridan, WY. She is also survived by her grandparents John & Vi Howe of Miles City, MT; her honorary grandmother Shirley Jones of Sheridan; her stepsisters Hilary (Ryan) Dooley & children of Shell, WY and Anna (Jessie) Thomas & children of Pine Bluffs, WY; and stepbrother Caleb Jennings (fiancé Jen Peters) of Cheyenne, WY. Kelsey was loved by numerous aunts, uncles, cousins, nieces, nephews and lots of wonderful friends. The family wishes to thank the Watt Dialysis staff, the Sheridan and Billings medical communities for their amazing care and support. In lieu of flowers, donations can be made to the The Diabetes Assistance Program or the Watt Dialysis Center, both in c/o Ada Kirven at Sheridan Memorial Hospital, PO Box 391, Sheridan, WY 82801, or the Sheridan Dog & Cat Shelter, 84 East Ridge Road, Sheridan, WY 82801. There will be no services held, but a private family inurnment will be arranged at a later date. Kane Funeral Home has been entrusted with arrangements.